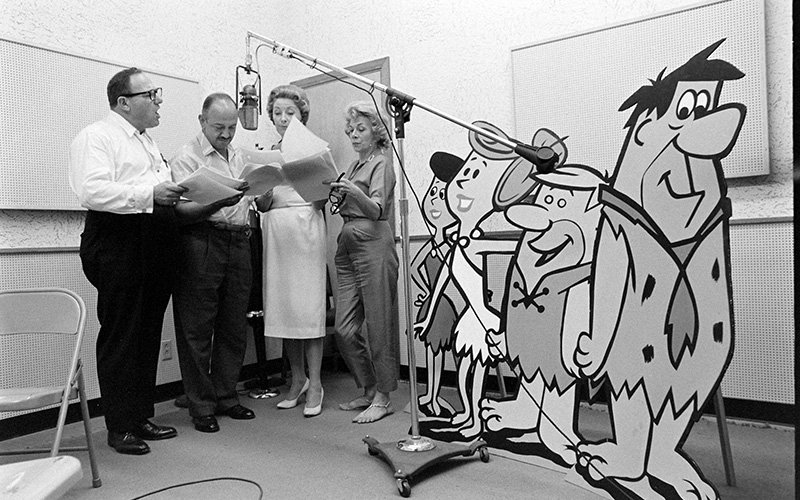 Generations of American kids have spent their Saturday mornings parked in front of a giant cathode ray tube with a bowl of cereal watching cartoons. The incredible galaxy of memorable characters we all know and love, from The Flintstones to Scooby Doo to The Powerpuff Girls, were all produced at a gorgeous midcentury modern cartoon factory in Hollywood—the Hanna-Barbera studios.

The creators of those shows, William Hanna and Joe Barbera, finally get their due in Hanna-Barbera: The Architects of Saturday Morning—the first museum exhibition on the world’s most successful animation partnership, which opens at the Norman Rockwell Museum in Massachusetts next week. “This exhibition continues our look at visual storytelling in its many forms,” says museum curator Stephanie Haboush Plunkett. “Illustration and cartoons are the people’s art.”

Hanna and Barbera met while working on Tom and Jerry cartoon shorts at Metro-Goldwyn-Mayer in the 1930s, and they started their own studio in 1957. Besides the incredible genius of the animators themselves, the secret sauce at Hanna-Barbera was the ability to churn out programming on the cheap (the fledgling outfit didn’t have the budgets that MGM did). They used new technology to copy cels and a technique called “limited animation” that only animated parts of the image like the mouth and eyes. The Hanna-Barbera style simplified characters and backgrounds (which were inspired by their California surroundings) and created animation that was cheaper, easier to produce, and more distinctive.

The team produced many popular shows, and later, in the ’90s and 2000s, they made a few forgettable live-action versions of The Flintstones and Scooby Doo. The founders died in 2001 (Hanna) and 2006 (Barbera) and the storied company disappeared into Warner Bros. Even the famed studio building on Cahuenga was sold to developers and turned into apartments and an L.A. Fitness (if only the people working out on the elliptical machines realized they’re sweating on the site where George Jetson, Yogi Bear, and the Smurfs were once drawn).

Earlier this year, Warner announced they were rebooting Scooby Doo and “unlocking the whole Hanna-Barbera Universe,” so stay tuned. In the meantime, keep your fingers crossed that the Hanna-Barbera exhibition travels to Los Angeles.