Home Dining Exclusive: The New Owner of Norms Reveals His Plans for the Legendary... 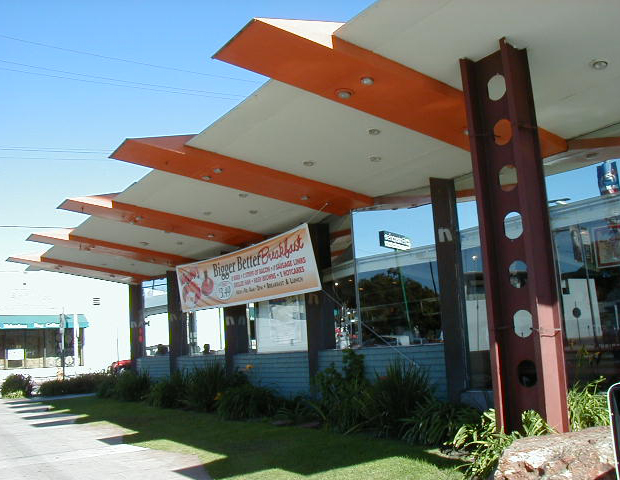 The iconic Norms coffee shop on La Cienega has been on our minds ever since the chain and its properties were sold separately late last year. The Los Angeles Conservancy leapt into action to landmark the Beverly Grove site in December. That action, and notice that a demolition permit had already been granted, generated an avalanche of national news coverage and booming interest on social media, more than they have with any other preservation issue in the history of the organization. Although the Cultural Heritage Commission will decide if the Armet & Davis – designed restaurant should receive monument status at a meeting on March 19, what they decide will have no effect on how the owners use the building. The Rialto Theater downtown, for example, has landmark status (it’s HCM #472) and it now houses an Urban Outfitters.

Norms isn’t a moldering movie house in the age of Netflix. Norms is buzzing and vital and packed with customers 24 hours a day. The low prices, high design, and central location make this a place where different classes mingle in a city increasingly segregated by wealth inequality. “We cut across everything,” says Norms president Mike Colonna of the restaurant’s clientele. “We have the blue collar workers, white collar workers with ties getting a quick lunch, ethnic diversity at every table. We get late night millennials, and our base of baby boomers. We’re kind of retro cool and we think the googie architecture is a big part of the brand.”

Developer Jason Illoulian of Faring Capital is the new owner of the land under the restaurant and its 43 parking spaces and until now, he’s kept his vision for the property under wraps, fueling speculation about what might happen to the beloved restaurant.

This week he told me his plan: To build a “community of shops” where the parking lot now stands. He envisions renting to tenants similar to those on Abbot Kinney in Venice or in the Brentwood Country Mart. “We’re trying to curate the experience,” he says. “We want it to feel authentic.” The developer has come to admire Norms’ architecture and hopes the neighborhood, the Conservancy, and future patrons will appreciate his vision for the landmark. “It’s such a beautiful building and that sign is just like fucking awesome,” he says.

Will there be room in this new village for an $11.99 steak dinner? “We’re hoping to keep it as a 24- hour diner,” says Illoulian of the restaurant space. “Whether it’s Norms or somebody else.”

Colonna, Norms’ president, says the chain would like to stay put. “Our intent, very clearly to the community and the landlord,” he says, “is to stay and run a Norms out of that location. Parking is a primary issue for us. We’re not a high end restaurant where you could valet park your car and take an elevator to the third floor.”

Plans being prepared for the site by Culver City architects Hodgetts + Fung, however, sound better suited for a restaurant that is. The firm is considering a two-story development with underground parking and a terrace adjacent to the existing restaurant space. Principal Craig Hodgetts tells me they are designing a “background building” that will frame the landmark structure where Norms is now (and might remain). “Forty-five feet is the height limit in that area and we are working within the established zoning guidelines—[Illoulian’s] not going to ask for any special dispensation,” he says.

Hodgetts, who is also working on the nearby Robertson Lane project (on the site of the old Factory nightclub) for Illoulian, doesn’t believe the current restaurant is a good fit for the rapidly changing neighborhood despite its appeal. “There is a hipster component,” he admits. “Some kind of a new elite are looking at Norms as an iconic reference without a hint of nostalgia. They’ve never been there but it’s cool on some aesthetic scale. Call it the Mad Men syndrome.”

His argument: people are more attached to the idea of Norms than the restaurant itself. “The 500,000 responses the Conservancy [got when they applied for landmark status] are not from the working class public, you can be assured of that. They’re from people who are aesthetically aware.”

When coffee shops like Norms were thriving in the 1950s, the clientele was similar to today: Cops, delivery drivers, young families, old folks, and the occasional celebrity. James Dean was a regular at the restaurant the architectural style was named after, the original Googie’s on Sunset. Historian Alan Hess described these establishments as places where George Jetson and Fred Flintstone could meet over a cup of coffee. Spaces that were high style, yet egalitarian. Mid-Century restaurants, furniture, and tract homes were a little like cathedrals that way—refuges of dignified living. The Case Study House program was established after WWII to imagine cheap but elegant housing for returning servicemen, not to create trophy estates beyond the reach of most people.

Today, the landscape has changed. “Norms is not a good fit on La Cienega,” says Hodgetts. “It’s not appropriate. I think the original audience (for Norms) is really happy and content with the generic In-N-Out Burger type of place.”

Ultimately the final decision will come from Illoulian, whose company spent $10.7 million for the site back in December. “The goal is to do the right thing,” he says, “I’m just trying to build cool shit that people will want.”