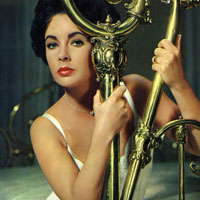 The tenth season of Cinespia outdoor film screenings at Hollywood Forever cemetery kicks off this weekend. Hundreds of people line up hours before the show with picnics and blankets to curl up in the century old burial ground sometimes watching the same Hollywood stars that are buried nearby. It’s become a great Los Angeles tradition and I love it.  However… I know it takes a while to plan these, but I’m not sure it’s the right time to show Cat on a Hot Tin Roof starring Elizabeth Taylor. Hosting punk shows, comedy nights and all-night slumber parties, Hollywood Forever skates a fine line between respect for the dead and joie de vivre. I know she’s at Forest Lawn, but with just 52 days between the party and Liz’s passing, I call “too soon.”