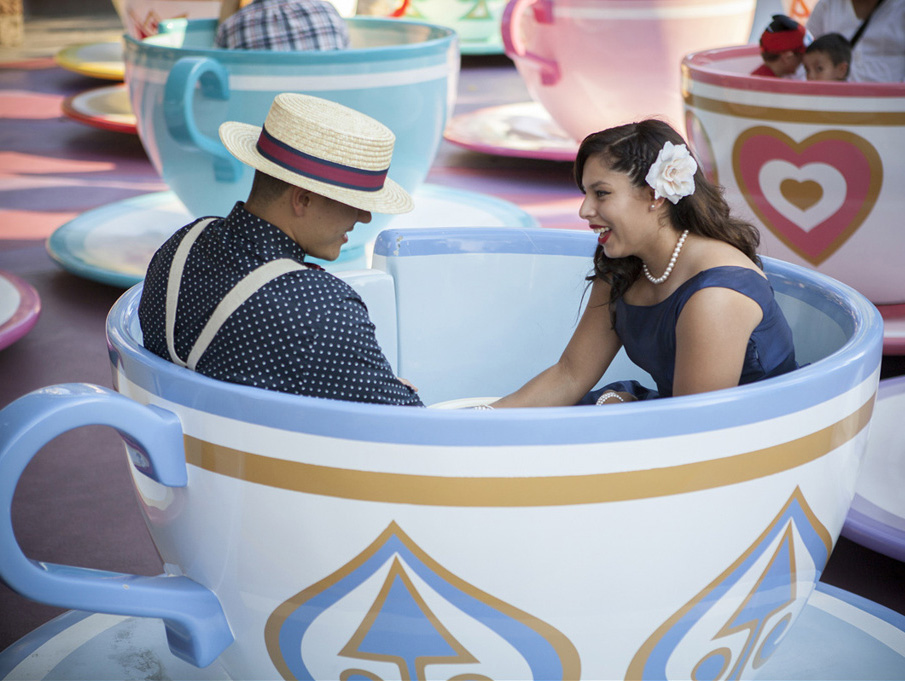 Everybody wants a little piece of Disneyland to call their own. Group excursions celebrate tiki or Goth culture, gay days, even a Star Wars weekend. One of the largest outings is Dapper Day this Friday, September 18.

More than 20,000 people will arrive at the park gussied up in pearls, furs, and all manner of snazzy headwear. Organizer Justin Jorgensen has a deep appreciation for the artistry of Disneyland (he has been a consultant for the company) and figured that a well-dressed audience would only improve the fantasy environments Imagineers worked so hard to create, but he’s not slavish to any particular era. “Disneyland is a complete amalgam of the past 150 years,” Jorgensen says. “From land to land and from attraction to attraction you’re changing time periods, just like L.A. itself. You have art deco Hollywood, 1980s, some Victorian, and all the buildings go right up against each other. We have this stylistic all-skate where anything goes all the time.”

In addition to the Friday park jaunt, this year’s festivities include a Saturday vintage car show, a Charles Phoenix slide presentation, and the official after-party Folly with multiple rooms of live entertainment. “We have Jonathan Stout and swing dancing, we have DJ Sean Patrick who is very contemporary. It’s extremely eclectic like everything else,” Jorgensen says. “We’re embracing all of it and it makes you dance. It’s the perfect setting for a night of glamorous mistakes.”

The fall soiree is the tenth Dapper Day event organized by Jorgensen, who says that fundamental changes in the fashion world made it possible. “I don’t think this could have happened 15 years ago. Fashion has evened out, and everything is in style at the same time. Designers like Tom Ford reference the ’70s, others the ’20s or the ’50s or edgier things. Things are no longer in style or out of style. We’re equally embracing all moments in fashion right now.”

Los Angeles magazine is a sponsor of this year’s event, so I asked Jorgensen why he chose to create it in the first place. “Women had these fun floral dresses, and there are no big outdoor daytime parties,” he says. “When you dress up it’s for a wedding or a graduation. When you’re going to the club with your friends it’s at night and you need to look sexy and you’re wearing black. There was no great opportunity to look great in the daytime.”

“This is just regular men and ladies realizing that the cut of those suits on Mad Men looks really good and I want one,” Jorgensen says. “Dita Von Teese mentioned that a lot of styles from midcentury are more complimentary to a curvy female figure. Vintage looks are not treated as costumey as they once were. They have really entered into mainstream fashion.”

As a creative consultant Jorgensen recently completed architectural color design for a resort in Macau and orchestrated a collaboration between Dreamworks and designer Jeremy Scott that resulted in a line of clothing featuring the green ogre Shrek. His design for the two-day expo includes a castle-like structure with finials that Jorgensen personally leafed in 22-karat gold. “My friends said, ‘I can’t believe you’re using real gold,’ and I said, ‘It’s Dapper Day! That’s how we do things here.’ ”

PHOTOS: A Look at A Touch of Disney’s Opening Day