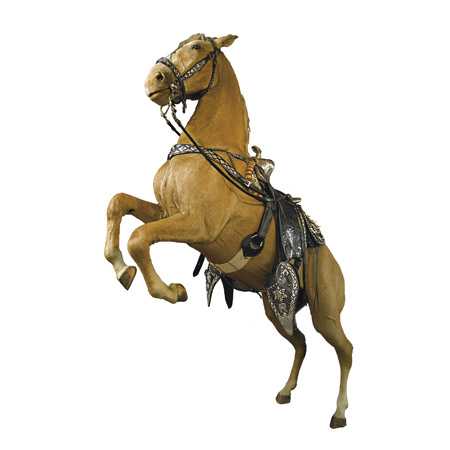 Frederic Remington, Louis L’Amour, John Wayne. The western genre is at the bedrock of the American myth and has blossomed in innumerable varieties for more than a hundred years. The movies imagined the cowboy as a pioneer, a fearless defender of America and a do-gooder for the helpless. Heck, we even elected a movie cowboy president in 1980. Roy Rogers made his name as a singing cowboy and in 1938 (a decade before marrying Dale Evans) met the love of his life, a golden Palomino he called Trigger. According to Life magazine, the brilliant and beautiful horse learned to sign a hotel register, drink from a bottle and do simple mathematical equations. By the 1950s, Trigger was dolled up in the equine equivalent of a Nudie suit and the duo starred in a television show together. This wonder horse continued his adventures in his own comic book, toys and apparel. Roy and Trigger were a midcentury cultural juggernaut. Merch! Glamour! Retirement! When Trigger died in 1965, Bischoff’s Taxidermy transformed him into the centerpiece of Roy’s museum in Apple Valley, California. When Roy himself left us, Trigger took a detour to Branson, MO. In 2010, the cable channel RFD-TV paid $266,500 for his remains at a Christie’s auction and sent him on a national tour, culminating with his post-mortem appearance in the 2011 Tournament of Roses parade. The show must go on.