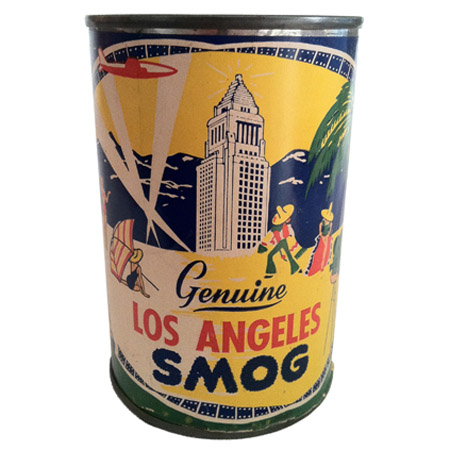 Nerves were already on end in the summer of 1943 when Los Angeles experienced its first major smog attack. Thick and murky skies that July 26th caused eyes to burn and noses to run and some panicky Angelenos imagined Japanese forces launching chemical weapons.  The real culprits, of course, were our cars and factories spewing noxious gas into the air. Almost half a million newcomers arrived here during the 1940s and the wartime boom made a bad air situation worse. The strange bowl-shaped geography of L.A. doesn’t help and even campfire smoke lingers. When Juan Cabrillo arrived at San Pedro in 1542 he called the land the “Bay of Smokes.”  After World War II the county established the first air pollution control district, but experts argued for years over the cause of the phenomenon. Cal Tech professor Arie J. Haagen-Smit was the first to explain the mystery after testing on plants and human subjects, which confirmed that smog was not emitted directly from tailpipes, but was formed when exhaust met sunlight and became ozone. Years of debate followed, with regular protests and crazy inventions for curing smog and crazier entrepreneurs selling “fresh clean” air in cans and balloons. The first step to better air was to establish trash pickup in L.A. and outlaw backyard incinerators, which happened in 1957. The next step was cleaning up factories and refineries. It took decades to start reducing pollution from vehicles, but unleaded gas appeared in the 1970s and things started getting better. That was the decade of first stage smog alerts, where school kids couldn’t leave the classroom. There were 121 days like that in 1977 and only one in the last 15 years. Even with all the improvements, the American Lung Association still lists Los Angeles #1 on their list of most polluted cities. I wonder how the air inside my 1958 can ranks?