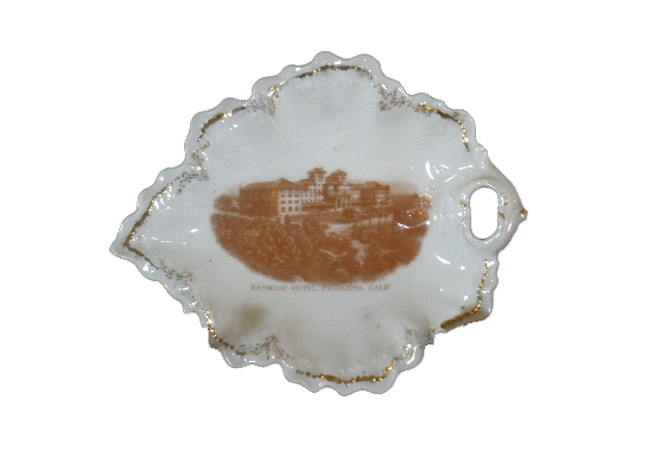 During the great California boom of the 1880s, Boston tour guide Walter Raymond brought vast numbers of wealthy Easterners out west. His two-month railroad excursions offered a warm-weather vacation swing through Los Angeles, but the accommodations did not meet the prosperous visitors’ expectations. Raymond, with the help of his railroad tycoon father, built this grand hotel, our first lavish resort, in 1886 just as the city of Pasadena was being incorporated. The Santa Fe Railroad had a stop nearly at the front door of the hotel where visitors would stay for an entire season, and enjoy local attractions like the San Gabriel Mission, Cawston’s Ostrich Farm, and Busch Gardens. The hotel was lush and lavish, with wide porches for gazing upon the abundant landscape and snow capped mountains. The hotel burned in 1901, and was rebuilt five years later, (This souvenir is from that incarnation, which closed for good in 1931 and was demolished soon after.) A busted Mr. Raymond retreated to the caretaker’s cottage (now the Raymond Restaurant and 1886 bar) where he died three years later.