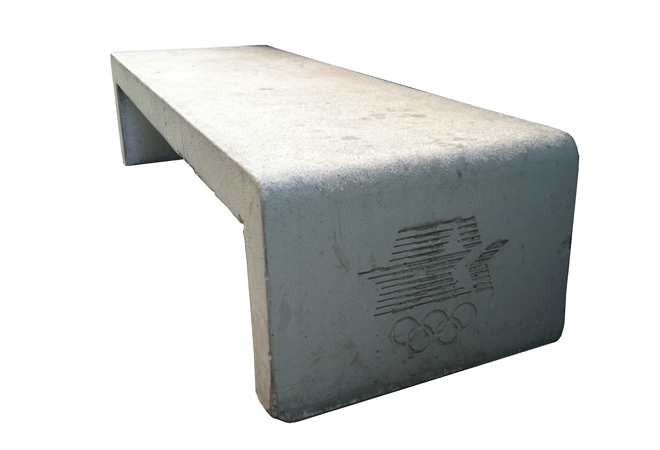 Hosting the Olympics more than once is a pretty big deal. Only Paris, London, and Athens share the honor with Los Angeles.  Almost thirty years after L.A.’s opening ceremonies (which featured a Lionel Richie concert and a Bob Gurr spaceship) some of the infrastructure, artifacts, and annoyances of the 23rd Olympiad remain, like the USC Swim Stadium, one-way streets downtown, and these concrete benches with Robert Runyan’s Stars In Motion graphic stamped into the side. They continue to serve their purpose near the Coliseum in Exposition Park.

The ’84 games taught the world that the Olympics could be high design (the festive pavilions of Sussman/Prezja and Jon Jerde are currently on view at the Getty museum), enrich a city’s infrastructure and tourism, and even make a lot of money. Time magazine named Olympics organizer Peter Ueberroth “Man Of The Year,” and the privately financed games created a profit of more than $230 million dollars. Much of which went to the LA84 foundation, which continues to grant scholarships and fund sports programs throughout Southern California.