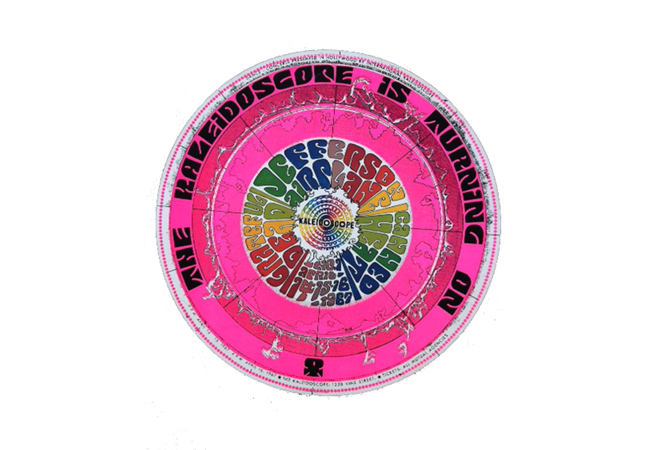 This DispL.A. Case is about a psychedelic concert poster, but also takes a moment to reflect on the layers of history that even a single wall can have. The circular handbills were affixed to buildings around town to promote the opening of The Kaleidoscope, a live music club whose opening night acts were The Grateful Dead, Jefferson Airplane, and Canned Heat in April 1967.  Today, this club is Nickelodeon On Sunset, with soundstages for Nick shows including Sam And Cat, but in 1938 it was a glittering moderne nightclub showcasing the dancing girls of the Earl Carroll Vanities. The high style nightspot was known for dancing, boozing, and celebrity spotting, and had a great run (they even made this awful movie about it) until Mr. Carroll died in a 1948 plane crash. Frank Sennes turned the club into the Moulin Rouge, Queen For A Day was filmed there in the 1950’s, and the dance show Hullabaloo ruled in the mid 1960’s. After the Kaleidoscope’s short run the Dutch art collective The Fool covered the façade with a psychedelic mural for the run of the musical Hair, Star Search was here in the 80’s, and who knows how many brief runs of stage plays, TV shows, and rock clubs ruled before Nickelodeon took over at the end of the 20th century. Seventy-five years of entertainment in one concrete box. Collector Jim Heimann carefully peeled this poster off the wall and stashed it away in his epic collection, where it still resides.