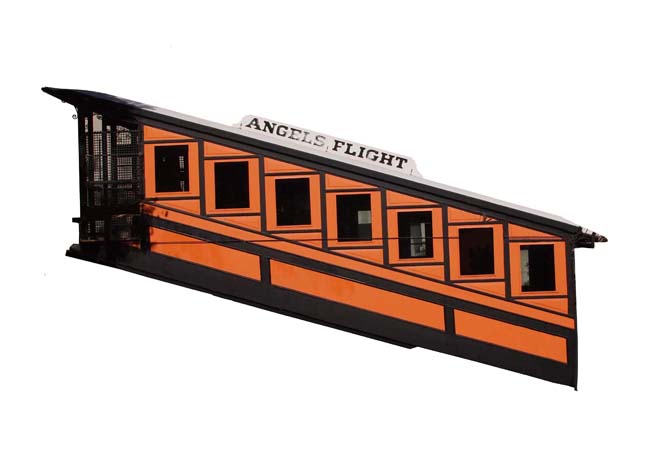 The destruction of Bunker Hill was well documented. The 1960’s disintegration of the once-ritzy neighborhood in downtown Los Angeles is captured in photographs, newsreels, and endless stories. As the slow, sad end turned the apartments, the houses, and the streets back into dust, Olivet (shown here) and Sinai, the twin rail cars of Angels Flight, remained the one bright spot in that orgy of destruction. The world’s shortest railroad, which ferried passengers up and down the hill from 1901 to 1969, connected downtown’s business and entertainment center to its tony residential district. On May 18, 1969 so much of the hill was gone that the trains stopped running and went into storage with a promise to return once the redevelopment was complete. Twenty-seven years later the cars were restored and returned to a new spot in the old neighborhood. Today, the equation is flipped as downtown loft dwellers, living in what were once banks and fancy department stores, ride up the hill to jobs in high rises, or to visit cultural institutions or hear music at California Plaza.