Home Uncategorized DispL.A. Case #46: The Beatles At The Hollywood Bowl 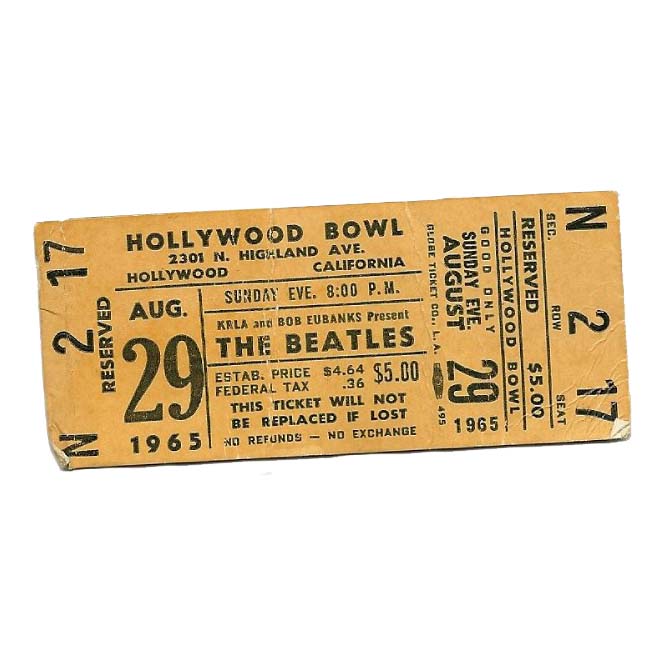 Let’s say you were enjoying a McDonald’s hamburger on the corner of Lakewood and Florence in August of 1965. A teenage music fan excited about the Beatles concert (who would grow up to be Los Angeles Public Library map guru Glen Creason) probably would have tried to sell you this ticket to the most famous show in Hollywood Bowl history. He wasn’t even that concerned about the five bucks DJ Bob Eubanks would have made off it. “My Dad was a ticket-broker who over-bought,” Creason explains. “So he gave me a fistful of tickets.” That concert represents a turning point for the Beatles, and for L.A. “The Beatles took their first voluntary acid trip in L.A.,” says Domenic Priore, author of Riot on Sunset Strip: Rock ‘n’ Roll’s Last Stand in Hollywood. “It was also the day they met ‘Old Hollywood.’” Priore explains why the band’s second concert was more important than the first and celebrated with an over-the-top cast. The band spent that weekend with Peter Fonda, Groucho Marx, Jack Benny, Edward G. Robinson, and The Byrds. “Few Angelenos recognize how important The Byrds were…after that acid session, the Beatles next LP was Rubber Soul. That was directly influenced by (this visit).” In his book, Priore explains how the art, the fashion, the entire “summer of love” universe traveled from Los Angeles to San Francisco and then around the world.