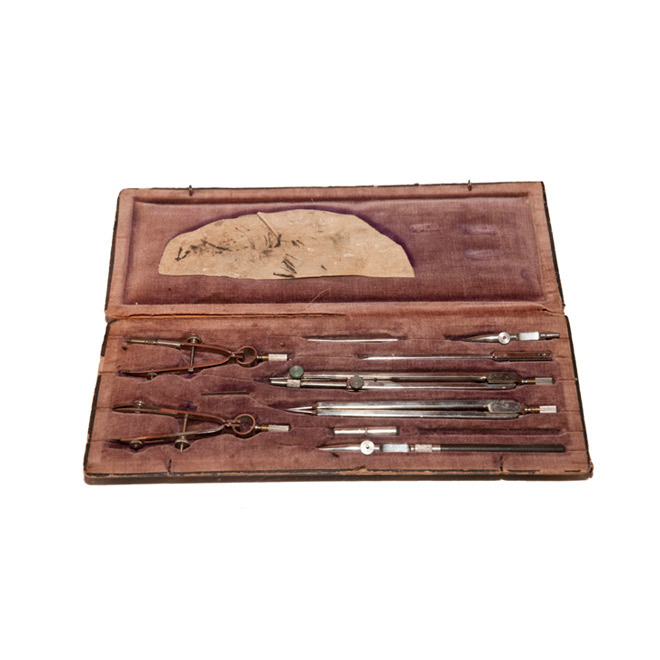 The little velvet box holds tools as important to an architect as a scalpel is to a surgeon. This collection of 10 implements (including compasses, nibs and dividers) helped to create the Craftsman style and some of the most important and lasting designs to ever come from Southern California.

Charles and Henry Greene adapted the ethos of the Arts and Crafts movement, took some cues from Japan, and invented the ultimate bungalow, and a new California lifestyle. The houses were works of art, but also included features like sleeping porches to take advantage of the mild weather, and broad eaves to deflect the harsh sunlight. In 1908 Charles told Western Architect magazine that “The Style of the house should be as far as possible determined by four conditions: First, Climate; Second, Environment; Third, Kinds of materials available; Fourth, (the)… life of the owner.”

The Greene brothers followed their doctor father to Pasadena in 1893 and created more than 150 structures, nearly half of which have been lost. Of the remaining homes, only the magnificent Gamble House is open to the public. The winter home of the family that owned the Procter & Gamble Company gave the brothers an enormous budget and creative control that allowed them to utilize fine materials like oak, mahogany, and leather. Stained glass artisans created custom windows, doors and light fixtures for each house. Today, when a single Greene and Greene light fixture appears on the auction block, it can cost more than an entire bungalow.

When the American Institute of Architects honored the duo in 1952, the award described them as “formulators of a new and native architecture.” That formula required the use of these tools, which were donated to the Gamble House in 1973 by Henry Greene’s youngest son, William Sumner, and his wife Harriott.