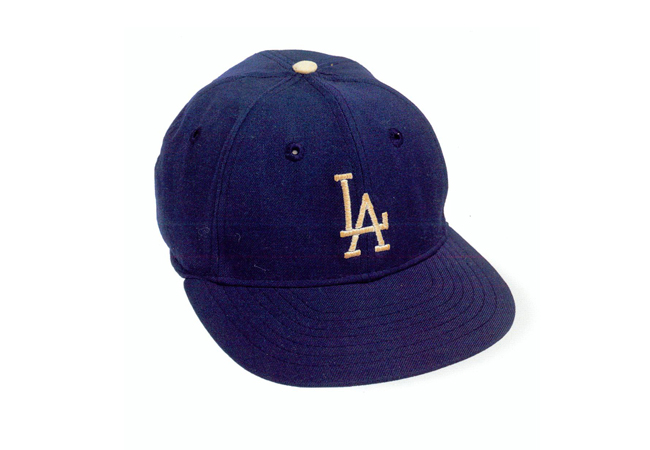 When the Brooklyn Dodgers relocated to Los Angeles in 1958, thousands of fans lined Broadway to see stars like Pee Wee Reese and Sandy Koufax cruise by in Edsel convertibles. They were on their way to the Coliseum where they temporarily set up shop before their ultramodern stadium was built in a canyon north of downtown. Prior to the team’s relocation, the closest professional baseball was in St. Louis. Their arrival told the world Los Angeles was finally a big city.

After lobbying from Kenneth Hahn, Roz Wyman and others, team owner Walter O’Malley agreed to swap a minor league ballpark in South Los Angeles for the canyon property known as Chavez Ravine in 1957. The city had acquired the land for a never-built public housing project and voted to approve the trade. A few months later, the Sheriff’s department removed the last tenants in the deteriorating neighborhood.

The canyon was filled, the stadium completed, and the Dodgers won the World Series in 1959.  This cap was worn by Sandy Koufax. The young ballplayer was named MVP in 1963, won the Cy Young award that year, and again in 1965, the year he found himself in the spotlight for refusing to pitch the World Series on Yom Kippur, and again in 1966 when he retired from the sport at the age of 30. Earlier this month the team hired him back as a Special Advisor.

Photograph courtesy of the LA84 Foundation