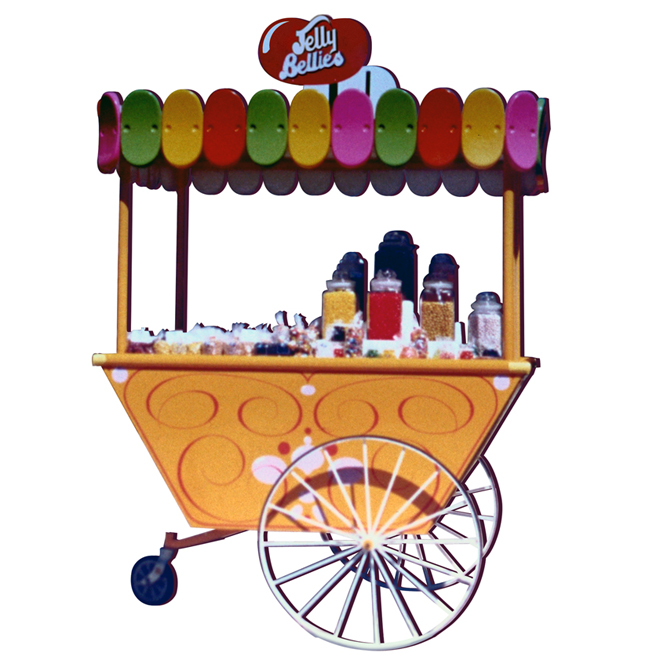 Wacky Dave Klein has been in the candy business for decades. Today, his concoctions tend towards the goofy and gross-out. His Covina factory churns out gummy fingers and ghost boogers, but in 1976 the former UCLA law student came up with the first “gourmet” jellybean and called it Jelly Belly. Klein contracted with Northern California candy maker Herman Goelitz to produce a smaller and stronger flavored jellybean in a variety of unusual flavors like root beer and cream soda. Goelitz was a well-established confectioner with a history dating back to the Civil War-era. They began a partnership and Klein went on a publicity tour to sell the new treats. Klein wore a funny beanie and threw around candy on the Mike Douglas Show, he made a superhero cowboy candy suit, and he wore a bean on his belly and showed off the jiggle.  The candy became a hit and millions of the little treats were shipped out in clear glass jars.  In 1979 the company set up an old-fashioned pushcart at the Century City Shopping Center near film studios (The cast of Dallas became regular customers) and the high rises of Century City, where Ronald Reagan had an office. When the former governor gave up smoking in the mid ‘60s, he turned to the “pectin” jellybeans made by Goelitz. When the company started making Jelly Belly he was an instant fan, ordering three-and-a-half tons of red, white, and blue beans for his 1981 inauguration, spreading word of the magic beans around the world. “In life you only need to be a genius for 15 seconds,” Klein says in the 2010 documentary Candyman. “This is America. If you come up with a good idea, you can run with that idea. “