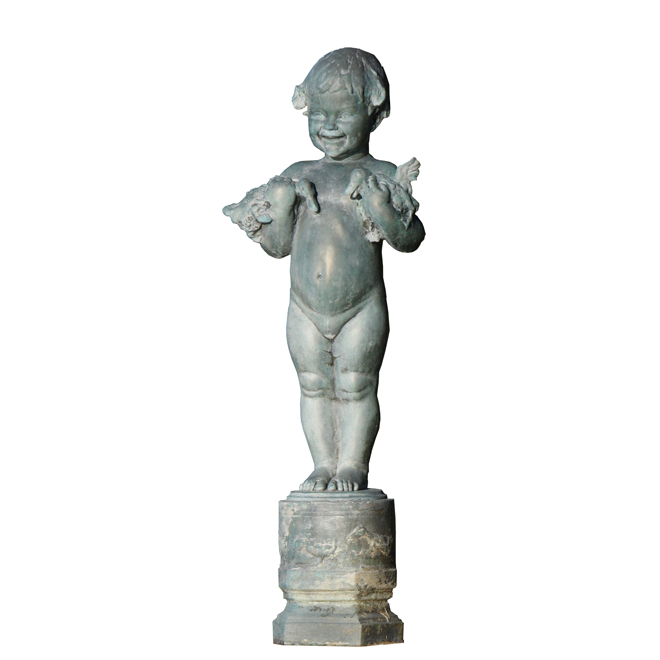 Nearly a century ago Hubert Eaton revolutionized the way we bury our dead. Instead of scary, scraggy graveyards full of misshapen and collapsing monuments that nobody wanted to visit, he invented Forest Lawn, the first “memorial park” on a Glendale hillside in 1917.  Banishing tombstones, he installed bronze tablets flush with the ground. He installed replicas of famous churches and promoted weddings at Forest Lawn (my own mom was married there), and promoted it as a tourist attraction complete with a museum. The posh surroundings attracted eternal residents like Walt Disney, Mary Pickford, Michael Jackson, and thousands more notable Angelenos.

The first artwork Eaton purchased for Forest Lawn was this sculpture, Duck Baby, by Edith Barretto Parsons. Eaton saw it on exhibit at the Panama Pacific International Exhibition, sort of a World’s Fair held in San Francisco’s Palace of Fine Art in 1915, and purchased a bronze cast of it six years later. Eaton would travel the world collecting antique furniture, stained glass, tapestries, paintings, and other art treasures for Forest Lawn.

Today, this cheery child is placed near the entrance pool beside a fountain with circling swans. Some critics initially scoffed that this colorful environment was somehow not as dignified as a traditional cemetery, but it has endured as a model copied around the world.