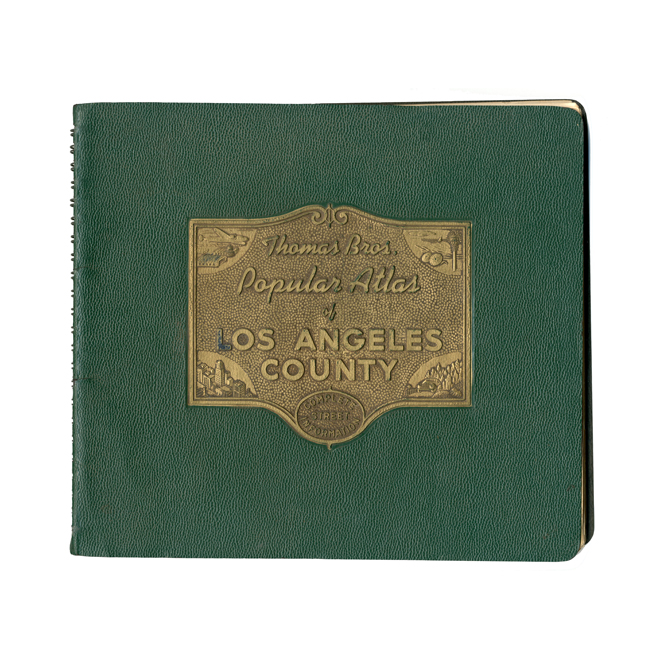 For almost one hundred years, the Thomas Guide has been stuffed into glove boxes and lost under seats. The spiral bound key to Los Angeles roadways was created by an English expat living in San Francisco. George Coupland Thomas (and to a lesser degree his brothers Leonard and Guilbert) founded the company while working as a draftsman for a pottery company. He traced official city map books and gathered information from realtors, phone books, and even police records, constantly updating the streets, buildings and landmarks of the city. In 1942 he moved the headquarters to Glendale and soon after produced the handsome edition seen here from the collection of the Los Angeles Public Library. The company, which was purchased by Rand McNally and moved to Chicago in 1999, employed dozens of cartographers and consulted with a team of ham radio operators, motorcycle enthusiasts and dedicated readers to publish a revised edition each November. Those of us who grew up with the maps love the old quirks: the deliberate fake streets inserted to protect copyright, the torn pages stuffed back inside. With the advent of cheap and accurate GPS and free online maps, the book has disappeared from the pizza wagons, ambulances, and taxi cabs that found it the authoritative guide to navigating the city. Amazon has copies listed at .37 cents and $900 dollars, so it’s hard to tell what kind of value people put on this information in 2012, but to road warriors, the Thomas Guide is invaluable.