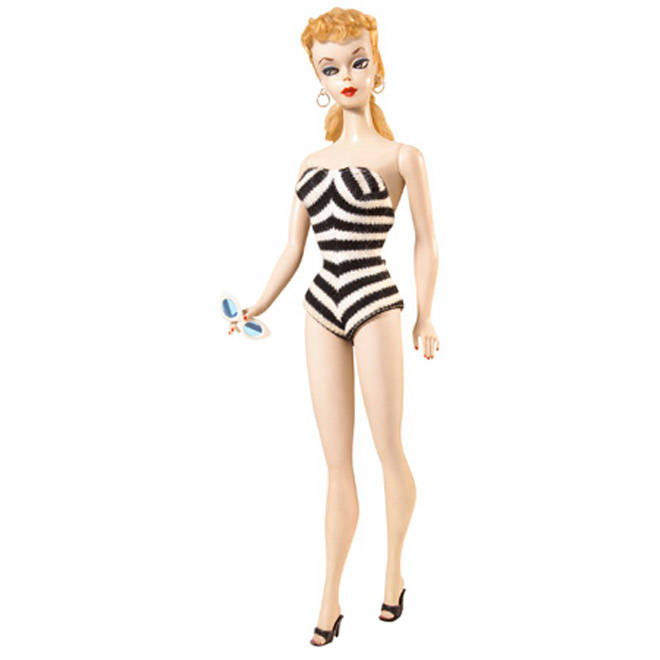 The BBC reports that three Barbie dolls are sold every second in over 150 countries around the world. That places her somewhere between the number of Taylor Swift albums and iPads churned out every day. Mattel was founded in 1945 as a picture frame maker but co-founder Elliot Handler started turning wood scraps into dollhouse furniture, and two years later introduced his first toy, the Uke-A-Doodle. The company hit its stride after a lucrative deal with Walt Disney to produce Mouseketeer merchandise for the Mickey Mouse Club TV show. By the mid-1950s Elliot’s wife Ruth observed that while their daughter Barbara had plenty of toy dolls to play with, she preferred simple paper dolls that looked like adults. Most American figures were babies or toddlers, so on a trip to Germany, Ruth picked up Bild Lilli, a blond doll with adult features and interchangeable clothes. Her daughter loved it. After some tinkering in their Hawthorne factory, Mattel introduced their version of a “Teen-age fashion model” at the New York Toy Fair on March 9, 1959. Barbie’s 39-18-33 measurements and um, character have been controversial since the beginning, but she’s still inspiring girls, starring in movies, being studied at universities, and apparently dating vampires. Any way you look at it, Barbie is immortal.