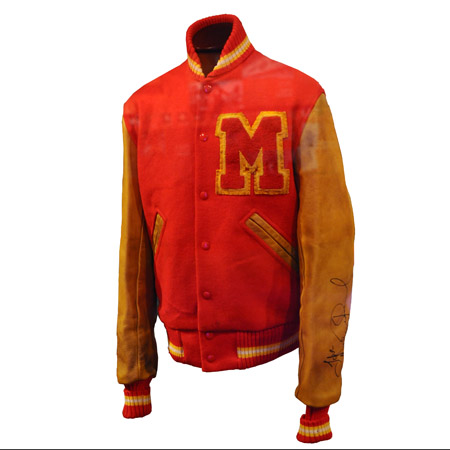 Michael Jackson’s Thriller is the most popular music video ever made. The 14-minute horror/dance film transformed a simple promotional tool into a cinematic event. Vanity Fair called it the “most popular and influential music video of all time.” At the height of its popularity, MTV played the film twice every hour, and in 2009, the Library Of Congress named it to the National Film Registry. The film reunited the director, cinematographer, composer, and make-up artist from An American Werewolf in London and was shot all over Los Angeles; at the Tower Theater, an alley in East L.A., and on Carroll Avenue in Angelino Heights. L.A.’s greatest monster fan, Forrest J. Ackerman, has a cameo and no less than Vincent Price provides the narration. The short marks the moment when music videos stepped up to grander aspirations and this one made Thriller the best-selling album in history. This letterman jacket was used in the video and is currently on display at the Grammy museum in downtown Los Angeles.