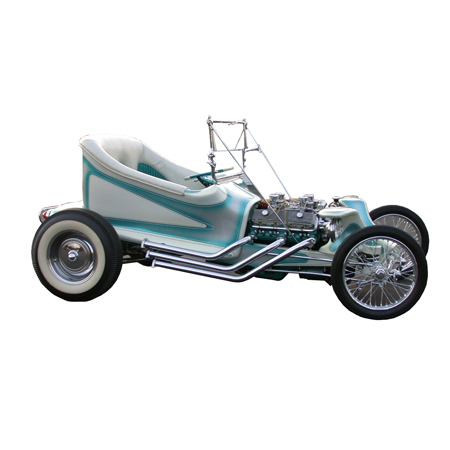 Ed “Big Daddy” Roth was born in Beverly Hills, but made his name in Maywood. His cinder block shop in Southeast LA. was the birthplace of dozens of bizarre custom cars molded from steel and fiberglass and outfitted with a Frankenstein’s laboratory of leftover auto parts. The swoopy and bulbous and stretched-out fantasy cars he built informed and inspired L.A. car culture for decades. The Outlaw (pictured below) was his first custom and was completed in 1959. He painted a menagerie of grotesque creatures like “Rat Fink” on T-shirts and sold them at car shows. Revell made models of the cars, but also his famous rodent mascot. Soon, Capitol Records put the mouse on album covers, Ben Cooper made Rat Fink Halloween masks, and innumerable plastic key fobs helped spread his toothy grin far and wide. Kids would line up to watch Roth paint live at street fairs and drag races, where Roth showed that anybody could create the car of their (twisted) dreams and that it was OK to be a weirdo. He made monsters beautiful.