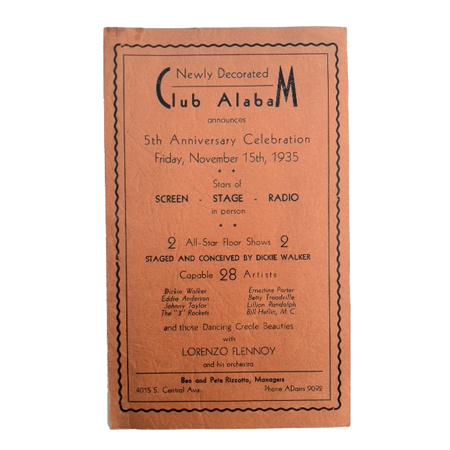 When artists like Louis Armstrong and Duke Ellington came to Los Angeles in the 1930s and ‘40s, they were invited to perform at the swanky nightclubs on the Sunset Strip, but asked to trek to Central Avenue for overnight accommodations.  The Hotel Dunbar, at 42nd and Central, was the center of black Los Angeles and clubs like Last Word and The Downbeat sprang up around it. The most famous of the nightspots was the Club Alabam, which advertised itself as the “Finest Harlem Cafe In America” when it opened next door to the hotel in 1930. The luxurious room had a fabric swag ceiling and an interior filled with palms like the ones seen at the Ambassador Hotel’s Cocoanut Grove.  Jazz legend Art Pepper described the club as “A huge room with beautiful drapes and silks and sparklers and colored lights turning and flashing. The bandstand was plush and gorgeous with curtains that glistened.” There were 28 acts in the anniversary party advertised on this playbill including Eddie “Rochester” Anderson of The Jack Benny Show and a group of “dancing creole beauties.” The big band and jazz crowds kept the good times running for more than two decades. “It was a sea of opulence, big hats and white fluffy fur.” Pepper later remembered, but the party was over by the 1950s. In 1964, the Civil Rights Act outlawed discrimination in hotels and theaters and the Watts Riots the following year marked the end of the Central Avenue nightlife scene.