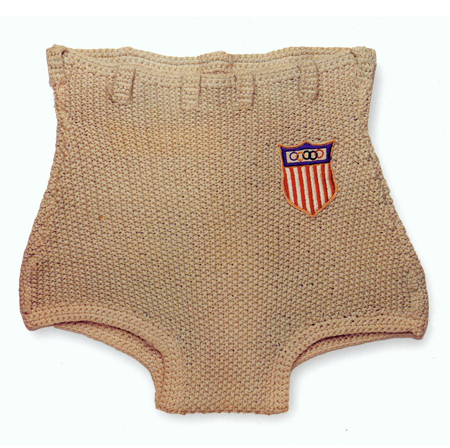 If you’ve ever driven down Olympic Boulevard or been to a football game at the Coliseum, you’ve experienced a connection to the Los Angeles Olympics. The 1984 Games were a worldwide phenomenon showcasing an international city, but the Tenth Olympiad in 1932 (Olympic Blvd. used to be called 10th St.) came at the height of the Great Depression and introduced a booming Los Angeles to the world. Landing the games was a coup and played into our booster fantasies. We didn’t have LAX or even Union Station, but the enhanced infrastructure performed extremely well and the games turned a profit. The Swim Stadium in Exposition Park was built for the competition and Frank Kurtz wore the trunks seen here when he won the bronze diving medal. The wool shorts look like chain mail but that didn’t stop American swimmers from taking home half of the 19 gold medals awarded that year. One of them was Clarence “Buster” Crabbe who won the role of Tarzan shortly after taking the gold. Kurtz went on to become a hero in WWII and have a daughter named Swoosie, who took home her own golden award when she won an Emmy in 1990.

Photograph courtesy of the LA84 Foundation