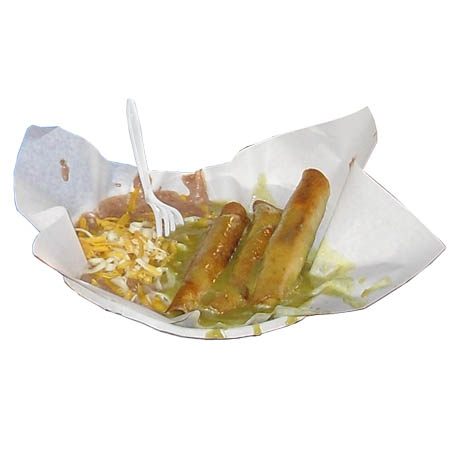 Christine Sterling became an activist the minute she saw a “Condemned” sign on the door of the historic Avila Adobe. The home, built in 1818, was located along an alley of decrepit buildings that she would help transform into Olvera Street in 1930. Sterling personally managed the Mexican marketplace for decades and enforced her rules that merchants must sell authentic goods from south of the border. She also demanded they wear traditional garb and serve traditional meals along the thoroughfare. One of the most popular food stands to open in the new park was tiny Cielito Lindo. Within Olvera Street, the American fantasy of a Mexican California, Zacatecan immigrant Aurora Guerrero created her taquito in 1934. People still line up for Guerrero’s creation: a tortilla tightly rolled around shredded beef, deep fried and slathered in avocado sauce. Taco USA author Gustavo Arellano cites the restaurant as the place where the “modern-day taco took its infant steps toward supremacy.” A generation later, Glen Bell would open his first Taco Bell in Downey and bring Mexican food to millions and help spread California’s creation around the globe.