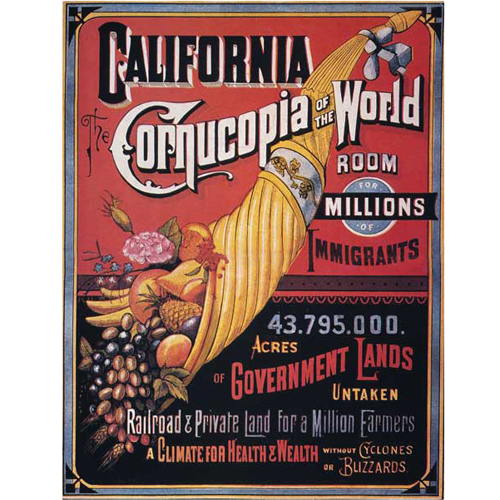 Do you hear that whistle down the line? When the Atchison, Topeka and Santa Fe railroad first chugged into Los Angeles in 1885 it brought curious tourists, health refugees and adventurers. Two years later, when ticket prices plunged from $125 down to one dollar, the floodgates opened and a building boom took off to accommodate all the newcomers. Boosters built hotels, amusements and streetcars linking far flung development sites from Redlands to Redondo.  Folks seeking to profit from the wide-open spaces printed up beautiful color posters promoting California’s bounty and pasted them up all over the country. They were so enticing that in the last two decades of the 19th century, the population of Los Angeles increased almost tenfold. While we may no longer have the abundance of land the poster promises, California is still the cornucopia of the world and we are still cyclone and blizzard free.