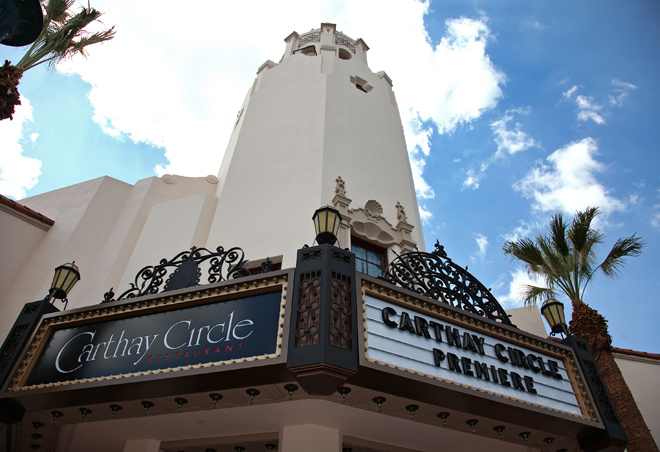 Walt Disney was such a genius. Not just for the wonderful films he created, but because of the technology, the community, and the thinking he facilitated. From creating the Experimental Prototype City Of Tomorrow, to putting a real little girl into cartoons before the movies could even talk, he was constantly innovating new kinds of know how. Snow White was the world’s first feature-length cartoon and held a grand premiere at the spectacular Carthay Circle Theater near Fairfax and San Vicente in 1937. The Mediterranean-style movie house rivaled the Chinese Theatre for spectacle and hosted a lavish reception with more than 30,000 fans lined up to celebrate the film whose profits would finance a new studio in Burbank. Three decades later, a squat concrete office building replaced the classic venue. When Disney’s California Adventure expanded under the theme of 1930s Los Angeles, a replica of the cinema was chosen as its centerpiece. The reconstructed landmark houses the Carthay Circle restaurant, with a luxuriously dim and plush interior filled with period-style fixtures and finishes based on the 1926 movie palace, but serving a 21st century California menu. When the company asked me to come try the venue, I jumped at the chance. If you’ve been to Disneyland in recent years, you know that the food has had a major makeover. From fresh fruit on Main Street, to the Napa Rose restaurant at the Grand Californian Hotel, the menus have evolved light years beyond burgers and fries on the Tomorrowland Terrace. Executive Chef Andrew Sutton, who has been at the park 12 years, previously worked at Napa Valley’s Auberge Du Soleil, and the Mansion at Turtle Creek in Dallas. The nine month old restaurant features local beers made in Anaheim, and 250 wine labels including an entire list from the “Disney Family of wines, including grapes grown by Walt’s daughter Diane Disney Miller, Pixar chief John Lasseter and the late Fess Parker. “Ninety two of our staff have passed the sommelier examination,” says general manager Jose Barragan. “More than any restaurant in the world.” The restaurant uses the “same purveyors, markets, and foragers” as Napa Rose in the Grand Californian Hotel. Chef Sutton says his goal is to “honor the building, and honor California.” The meal blended Asian, and Latin, and California flavors and included appetizers like Fire Cracker Duck Wings with Soy, Lime, and Sriracha Chili Sauce. A fiery fried biscuit with cheddar, bacon, and jalapeño was tempered with cool apricot butter and went down real easy. A filet mignon is served with Kobe beef cheeks and fingerling potatoes. Kids can choose reduced portions inspired from the adult menu; a smaller filet or buckwheat soba noodles. During the dessert course, a guest opened her eyes wide and exclaimed “I completely forgot I was in a theme park!” The chef smiled.