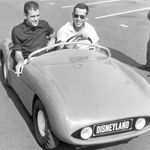 Your columnist Chris Nichols is a civic minded fellow and I serve on the board of Hollywood Heritage. The non-profit runs a museum in the barn Cecil B. DeMille used to make The Squaw Man, the first feature film shot in Hollywood. On March 13th I’m hosting an evening there with Bob Gurr. Mr. Gurr is a Disney Legend who began working on Disneyland the year before it opened. He imagineered the original Monorail, Autopia all the iconic ride vehicles for Disneyland and some of the other Disney parks. He will discuss his memorable theme park and movie creations, including Disney’s animatronic Abraham Lincoln, Universal’s King Kong, concepts for the Jurassic Park dinosaurs and robots for the 1998 production of Godzilla.  He will autograph his book, Design: Just For Fun, which is out of print, but will be available for purchase in the museum store. Below are some slides from Mr. Gurr’s personal collection.