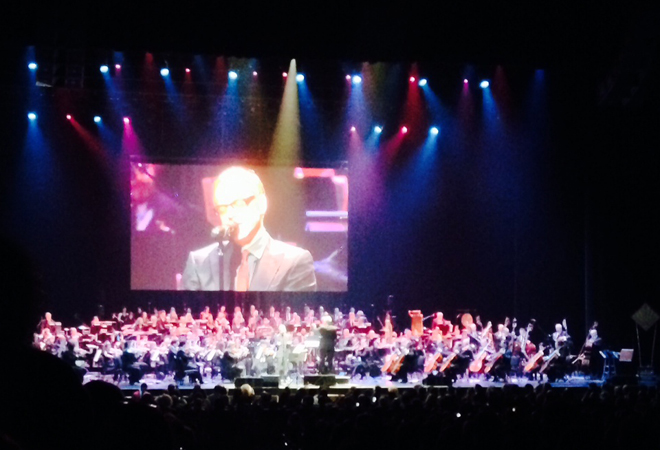 Thousands of black-clad Tim Burton fans descended on L.A. Live this week for a series of soundtrack concerts. Danny Elfman’s Music From The Films Of Tim Burton featured almost all of the scores the onetime Oingo Boingo front man has created since Pee-Wee’s Big Adventure in 1985. It was also his first live concert appearance in 18 years. The natty group fighting their way through the Staples Center traffic on their way to hear the tunes from Beetlejuice was dressed up in stripes, veils, and jaunty top hats. I heard a rumor one man attended in full Edward Scissorhands regalia while another crowd filed into a Clippers game at Staples Center. “This crowd is half jock,” The guy behind me told his friends. “And half Goth. It’s like World War Z out there.” More than 100 performers filled the yawning stage of the Nokia Theater and masterfully performed classics like Pee Wee, but beautiful orchestrations from less memorable films like Planet of the Apes and Charlie and the Chocolate Factory. You begin to appreciate the complexity of Elfman’s mind when you see that it takes more than 100 performers to make his tunes come to life. The collection of studio musicians (some of whom played on the original recordings) practiced for one day before the shows and absolutely nailed it. The whole thing felt like a scoring session, with images of the films projected behind the orchestra. Burton’s drawings and watercolors from the films were projected on three huge screens and fleshed out the show. Elfman himself emerged for the grand finale, reprising his role as Jack Skellington in The Nightmare Before Christmas. He was topped only by the surprise appearance of the magnificent Catherine O’Hara, his vocal co-star from the film, singing Sally’s Song. Her poignant performance of songs sung by a broken blue rag doll brought the house down.