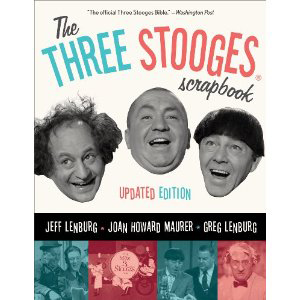 I was so excited to crack open the new edition of The Three Stooges Scrapbook today. I had this book when I was a kid and it was a great inspiration. This is how I learned to love old movies. It was a thrill spotting Los Angeles places in the backgrounds and I became so enamored with stoogedom that I even located and befriended some of the folks that appeared in the movies. The lavishly illustrated tome had a huge influence on movie lovers who hungered for this stuff in the years before TCM or Biography. I remember watching the Stooges after the Tom Hatten Popeye show on KTLA in the 1980s and in those pre-IMDB days would run to the Scrapbook to look up the details on the films I had just seen. The book is full of personal remembrances and memorabilia from Moe’s daughter Joan Howard Maurer, who became a good friend and mentor to young Ask Chris. This new edition manages to sneak in even more of her photos of Moe and company at home and behind the scenes. I still love spotting places like Chango Coffee in Echo Park when it was a drug store in Three Little Beers or Larchmont Village in False Alarms. The book is a hefty 350-plus pages and offers an encyclopedic but personal visit with Moe, Larry, Curly, Shemp, Joe and Curly-Joe from vaudeville to the rest home. I’m not sure what to think of the Farrelly Brothers film out next month (Snooki?! Larry David in drag?!) but I still love the Stooges.