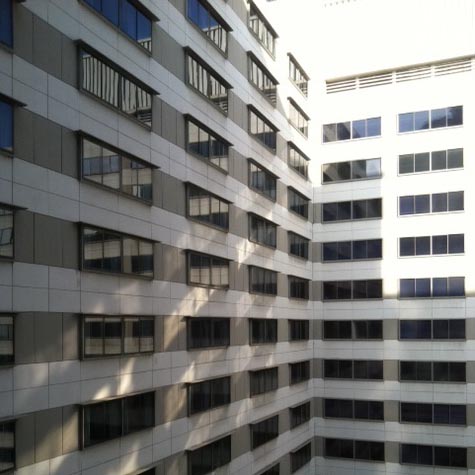 Over the weekend I dropped by the Wilshire Grand Hotel for their larger-than-life estate sale. (See slide show at right) The hotel closed at the end of last year and International Content Liquidations has been called in to dispose of its contents.  “This was the biggest show in town back when it was the Statler.” ICL president Frank Long said as he escorted me on a tour of the thousand-room behemoth in the heart of downtown. “It’s a city block. One thousand rooms, a hundred thousand pieces of china, hundred thousand pieces of linen, four thousand pictures…” Long trailed off as he sped down the deserted halls of the empty tower. ICL was behind the sales at the Ambassador a few blocks away on Wilshire and the Dunes in Las Vegas, where Ask Chris took it upon himself to test-drive a room filled with pillows by stage diving into them. I took a similar leap into one of their bouncy beds and learned that the company had to get a special state permit and a bunch of Steri-Fab before they could sell the sanitized mattresses.

The Wilshire Grand’s check-in has been repurposed as a cash wrap, display cases have been filled with sample selections and an entire clothing store was overflowing with the attire of maids, cooks and cleaning crews.  Long says most of the buyers so far have been mom and pop hotel and motel operators and collectors looking for pieces of the original Statler hotel that opened in 1952. Silver punch bowls and coffee urns still emblazoned with a Moderne “S” for Statler were available on Sunday, alongside old time bellman’s caps, and brass coat buttons from staffer’s costumes. How could all this material have survived from the Truman era and beyond? “We have so much back of house, we could afford to keep it all.” Said former hotel PR staffer Mark Loge, who is now running the gift shop-turned gallery where the hotel’s art collection currently resides. One of the original hotel artists returned to alert crews that the hotel had paneled over his work, which was located and exhumed. My personal favorite was a giant mosaic depicting the wonders of the oil industry, still hanging in the former home of the Petroleum Club.

Long said there was so much merchandise inside the hotel that it took him a week just to make a bid on the job and nearly a month to set up. The sale, which also includes the hotel carpentry shop, plumbing shop and prop house, runs seven days a week until the hotel is empty. “When we’re done you’re gonna have a frame” Long told me “And it’s gonna be dark.” A new Wilshire Grand will rise on the site in a few years. I’ll meet you there for a drink.