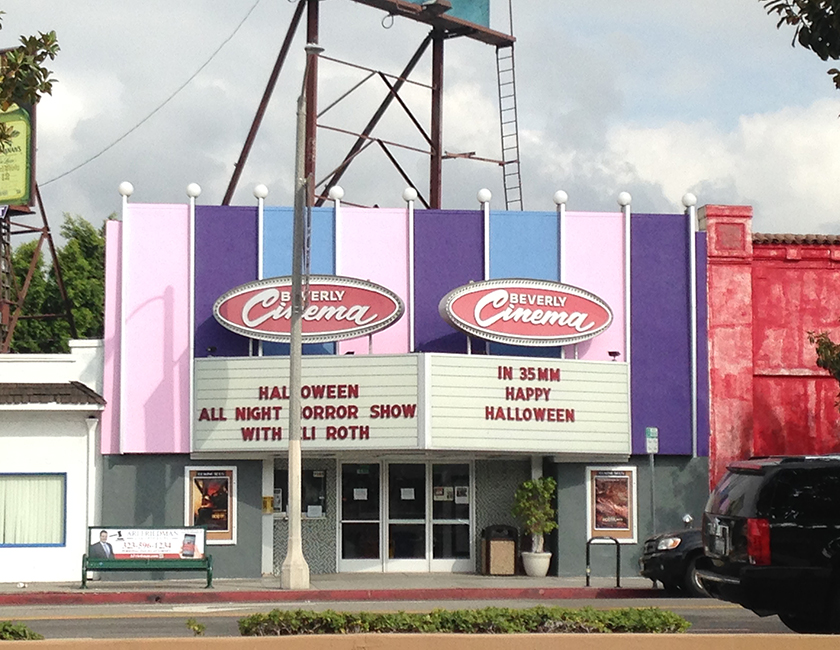 When Quentin Tarantino reopened the New Beverly Cinema earlier this month there were concerns that things would change at the venerable revival house. The Torgan family, who had operated the theater since 1978, was out and longtime employee Julia Marchese resigned in protest. Reviews have been generally positive for the latest incarnation, and as long as Tarantino stands by his pledge that “As long as I’m alive, and as long as I’m rich, the New Beverly will be there, showing double features in 35mm” the show will go on. Marchese recently released a documentary about the New Beverly called Out of Print, but the feature-length film spends only two minutes explaining the history of the storied address, so I decided to present this timeline explaining how a candy factory became a celebrity night spot, a home for Yiddish drama, a rumba club, and a porno theater as well as one of L.A.’s earliest art cinemas. Grab a bucket of popcorn and enjoy this ride through the history of the New Beverly.

1929
A simple Spanish-style building goes up at 7165 Beverly Blvd. First tenant is likely a candymaker.

1933
Bonnie Jean Candy Company appears at this address in a state agricultural guide.

October 21, 1934
At the end of their lease, the contents of Gene Colvin’s candy factory and beer parlor are put up for auction. The repeal of prohibition probably helped buoy the business, but the Great Depression was still in full swing.

1935
The Ice Cream Trade Journal reports that Phil Rivkin has “established a plant for the manufacture of ice cream” at 7165 Beverly Blvd.

August 2, 1936
California Republican Assembly headquarters is the temporary tenant of the closed factory. November 3, 1943
Slapsy Maxie’s opens at their new location, the former Wilshire Bowl nightclub at 5665 Wilshire Blvd. It is at this larger location that Jackie Gleason and Spike Jones performed, and Dean Martin and Jerry Lewis make their L.A. debut. The club closed around 1950 and became a Van de Kamp’s coffee shop. Today the location is an Office Depot.

May 11, 1947
Los Paisanos Pan-American club, for those “interested in Latin America,” meets at The Blackhawk club. Rumba nights are offered.

February 21, 1948
The Blackhawk is now known as Cully Richards’ Blackhawk.

October 6, 1948
Impressionist Jackie Green is the Master of Ceremonies at his namesake club, offering up tap dancers and Decca singing star Bob Carroll for a fourth engagement this evening. A newspaper columnist named “Sugar” reports that Jimmy’s “200-odd pounds beats himself into a cool sweat to rock the house to laughter.”

April 12, 1950
The New Globe theater opens The Banker’s Daughter, “a musical comedy hit.” Shows presented by Beverly-Fairfax Jewish Community Center. The group came under fire later that year for a scheduled screening of Charlie Chaplin’s The Circus to benefit a communist organization.

February 25, 1951
The New Globe theater, hailed as “a center of Yiddish drama in Los Angeles,” begins a program of Children’s Repertory Theater.

February 13, 1955
Finian’s Rainbow is staged by the Hollywood Repertory Theater.

October 10, 1957
The Playgoers Company launches a season of four plays beginning with Waiting For Godot. On Mondays and Wednesday nights, the theater hosts the Professional Actors Workshop.

December 1, 1957
Actors from the Pasadena Playhouse appear in Hollywood Repertory shows in the renamed Dahl Theater.

March 10, 1961
Dr. Seuss’s The 5,000 Fingers of Dr. T opens at the Riviera-Capri as the theater expands its lineup of children’s films. “Supervised film parties” are offered, and a summer film series includes Nanook of the North and The Adventures of Robinson Crusoe.

September 13, 1963
The New Yorker Theater, the city’s “latest specialty motion picture house,” is opened by a group of exhibitors and executives with the French comedy Monkey In Winter.

June 21, 1964
Ballet of Othello, a feature-length Soviet dance film based on the Shakespeare play, opens at the Europa theater. Works by Tchaikovsky and Dostoyevsky are seen through 1966.

February 23, 1968
The first Russ Meyer festival is held at the theater with a triple bill including The Immoral Mr. Teas, whose title is misspelled “Immortal” in the newspaper ads, perhaps testing the waters for the fare to come.

August 9, 1969
An “Educational Documentary” called Man and Wife holds a “world premiere” at the Europa. Admission is limited to adults over 21 who must also present their marriage certificate.

February 5, 1971
“Thanks to victories in San Francisco’s recent pornography trials” the Eros opens a double feature of The Confiscated and Adultery for Fun and Profit.

May, 1972
Ads for X-Rated films continue at what is now called the Beverly theater. Free candy, popcorn, and soft drinks are offered for a screening of Sex and the Working Girl.

May 5, 1978
Losing customers without advertising, Ziehm leases the theater to Sherman Torgan and his partners, who take over operations of the New Beverly. Their first double feature is A Streetcar Named Desire and Last Tango in Paris.

February 18, 2010
“As long as I’m alive, and as long as I’m rich,” Tarantino told the Hollywood Reporter shortly after purchasing the property. “The New Beverly will be there, showing double features in 35mm.”

October 1, 2014
Tarantino takes over operations at the New Beverly.