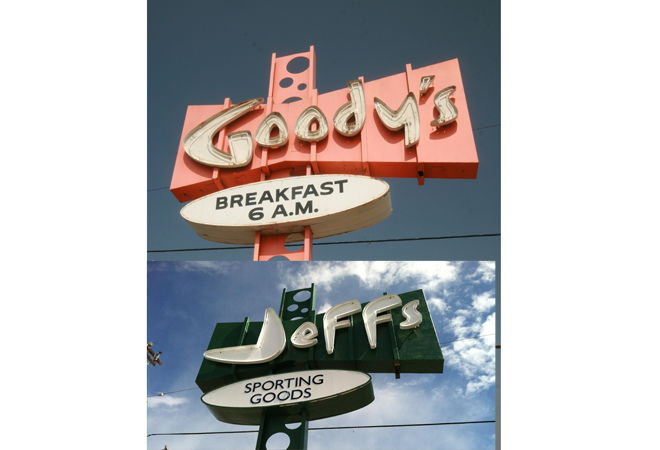 I get reports every day about some endangered landmark in Los Angeles county. A famous home changes hands, or some real estate deal that will doom our favorite roadside joint. Goody’s in San Gabriel closed three years ago, but their midcentury ranch-style building and classic googie signage was left intact when they relocated to a boring box in El Monte. Enter master preservationist Adriene Biondo and an enlightened city planner who steered new tenants into a creative reuse. What do you think of this? A hit or a miss?

“Exciting news from the historic preservation front! High five to the City of San Gabriel and property owner for working with Jeff’s Sporting Goods to preserve one of our most beloved Googie coffee shop sites. Goody’s faithfully served the community for over half a century, moving to its current location in El Monte in 2010.

The Fabulous Fifties brought us spectacular roadside signs that used to call to motorists everywhere. Sadly, most of these one of a kind signs were bulldozed long ago. But now the Goody’s sign will live on as Jeff’s with its asymmetrical bowtie and jaunty neon letters, all skewered onto an exposed industrial steel I-beam.

Jeff’s Sporting Goods has taken an innovative design approach to converting the former Goody’s site at 865 East Las Tunas in San Gabriel. Their project incorporates the sign and elements of this classic mid-century modern restaurant into a handsome new retail store which is set to open soon.

Just think of it…it won’t be long til we’ll be shopping for hiking boots and camping gear under the neon glow of Googie at its best! Thanks Jeff’s.”