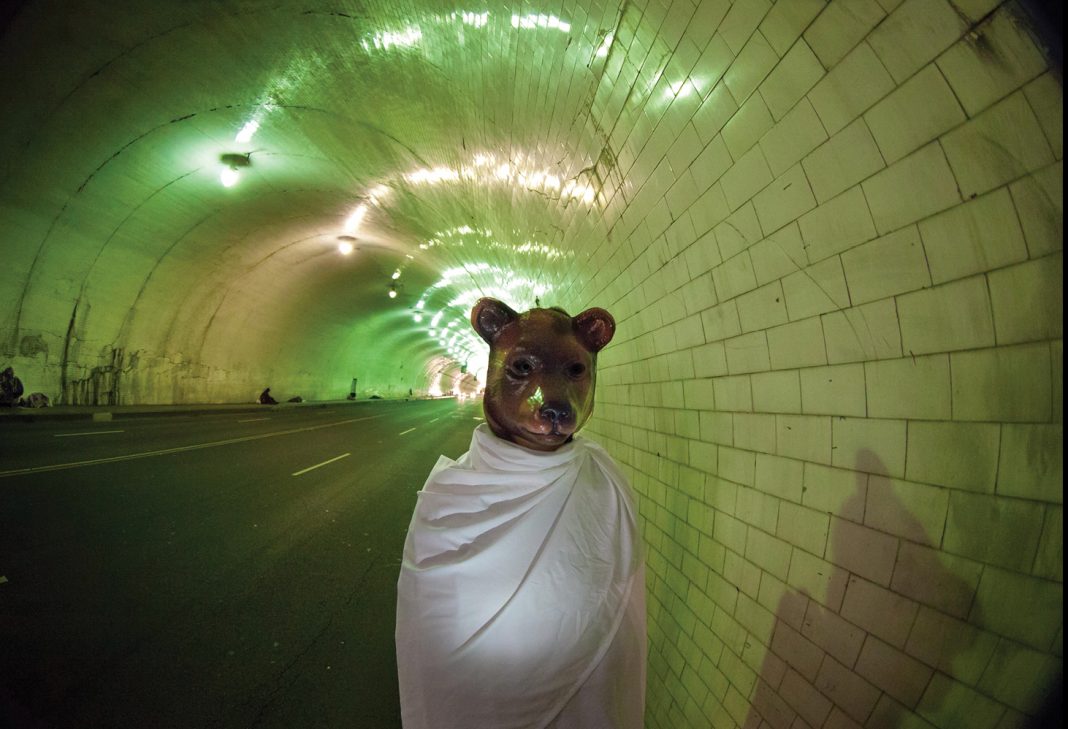 Moby’s Parade of Innocents
Musician, DJ, photographer, and architecture blogger Moby is leading a parade of Innocents to mark the closing of his photography show at Project Gallery in Hollywood. You are requested to “bring your own mask and sheet” to 6430 Selma Avenue tonight at 6:30. Meet the cult members at an unmasked reception to follow at Project Gallery. RSVP to [email protected]

Sunset Strip Revisited
The ’60s are still swinging for authors Robert Landau and Domenic Priore, who will be signing their books Rock ‘n Roll Billboards Of The Sunset Strip and Riot On Sunset Strip tonight at Larry Edmunds Bookshop. Landau captured the zenith of extravagant advertising with his Kodachrome slides, and Priore will share images from his exhaustive documentation of the musical moment when bands like The Byrds, Love, and The Doors broke on through with a new sound that turned the ’60s into THE ’60s.

Teenage
Once upon a time, kids grew up and became adults. Then, early in the 20th century, somebody declared the in-between time the teenage years. The artful new documentary film Teenage, from executive producer Jason Schwartzman, examines a lost world of flappers, jitterbugs, and subdebs. Schwartzman will be at the Laemmle NoHo7 tonight for a Q&A after the film.

The Invocation
An open bar stocked with ancient Aztec cocktails, a hidden location, a trickster coyote, L.A.’s White Witch…The Invocation is a one-time invitation to a secret society ritual that promises profane rites and trickster illusions. The creators warn that “epileptics and individuals with heart conditions or other health concerns are urged not to attend.”

Kristian Hoffman’s CBGB West
Now that the landmark club in New York has become a John Varvatos store, the closest you’ll come to experiencing the hallowed music shrine is an evening with original CBGB veteran Kristian Hoffman celebrating NY Punk Pioneers. Musicians from Blondie and Dramarama join the keyboardist onstage with sword swallower Brett Loudermilk, operatic dandy Prince Poppycock, and a “special guest from Hollywood Squares/Solid Gold whose name may not be mentioned.”

The Obscure Objects of Luis Buñuel
The Luis Buñuel Film Institute is bringing a collection of rare ephemera from the life of the Spanish filmmaker to the Velaslavasay Panorama. Original books, scripts, and previously undeveloped photographs will be on display, and the institute will premiere the restored 1933 documentary Land Without Bread. Special guests from Buñuel’s history in Hollywood will join guests for a reception in the venue’s lavish garden.

Collapse with Timur and the Dime Museum
The “dark glam opera” of Timur and The Dime Museum can only get darker when the end of the world approaches. This post-ecological requiem for the planet includes real-time animation, highbrow bondage couture, and a song about the Pacific garbage patch. Ringleader Timur is a dynamic wisp of black smoke that builds into Chernabog on this journey to the end of the earth.

Funky Junk Farms at Downtown Modernism
Colorful Eames chairs, sputnik chandeliers, and fancy food trucks will fill five acres of downtown’s industrial district this Sunday for Downtown Modernism, a flea market and street fair sponsored by Modernica. Our friends from Funky Junk Farms will be there with their restored travel trailers and enticing tales of weekend campfires reflecting off the sides of these “canned hams.”

Noir City: 16th Annual Festival of Film Noir
Now in their 16th year of dark alleys and double-crossers, the American Cinematheque presents another edition of Noir City: The Festival Of Film Noir. Sunday’s screening of Alias Nick Beal sounds especially rare and juicy. The Cinematheque describes the supernatural thriller as a “devious doppelgänger of Capra’s It’s A Wonderful Life.”

Monsterpalooza
Vampira, Ray Harryhausen, and The Creature From The Black Lagoon are the heroes of Monsterpalooza, a three-day festival of horror in Burbank. The session on creating animatronics sounds intriguing, but my pick is the live onstage makeup contest with the stars of the SyFy series Face Off. Watch monsters come to life from the safety of the back row.