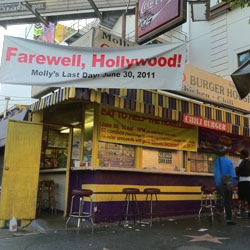 Share
Email
Facebook
Twitter
Pinterest
ReddIt
After eight decades, the griddle finally fell silent last night at Molly’s Charbroiler in Hollywood. The funky little stand is being cleared for a new 8-story office building to rise at Vine and Selma. It was really quite charming in its 1950s incarnation as the Curb Broiler, but the tired Molly’s wasn’t much to look at. On my first and only attempt to eat there yesterday I encountered the “Farewell, Hollywood!” sign and a stand that was out of grub. I wish the best of luck to owner Kwok Yi, but she had better cash her $1.1 million relocation check from the CRA before Governor Brown takes back all that redevelopment money