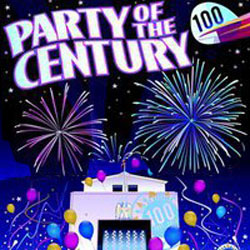 Tonight at 5, the city of Burbank celebrates their centennial with a gala spread over 20 square blocks of their booming downtown. I can just imagine the 5 Freeway this afternoon crowded with parade vehicles toting mountains of cupcakes, a time capsule and McGruff the Crime Dog. I’m probably going to miss the Air Parade where the crowds are buzzed by World War II planes and B-25 bombers, but hope to arrive in time to pose with the wax Bob Hope figure and meet cast members from Laugh-In. In fact, it was announcer Gary Owens who coined the immortal phrase: “Beautiful Downtown Burbank.” In between there are chances to mingle with an 18-foot animatronic T-Rex, free lemonade from Hot Dog on a Stick and marching in the mascot parade, everybody’s favorite 1980s TV pizza pitchman: the Noid. Now if the Noid doesn’t get you over the hill, nothing will.