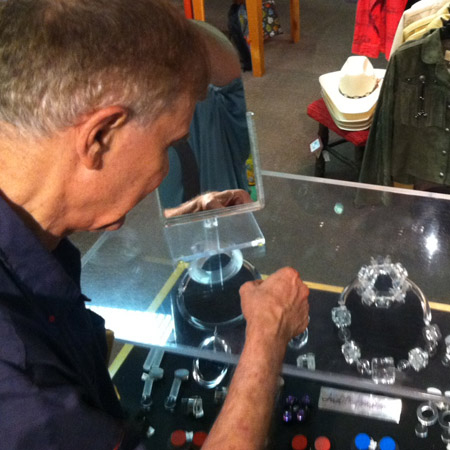 I recently had the chance to walk through the exhibit: California’s Designing Women, at the Autry Museum with curator Bill Stern. Stern’s Museum of California Design created the terrific California Pottery: From Missions to Modernism show there a few years ago and I was excited to see what treasures he would put on display. Designing Women spans almost the entire 20th century and includes decorative arts, fashion, furniture and even some Reagan-era computer graphics from April Greiman. Stern wanted to show “Women working in technology and materials that stereotypes have excluded them from.” Some of the objects, like the prototype Barbie dolls and the sculpture of Ray Eames, are some of the best known designs from the Golden State, but some are complete revelations. One of the earliest pieces in the show is a swoopy art nouveau lamp by Elizabeth Eaton Burton. The artist fashioned the delicate piece from materials she found in isolated 1910 Santa Barbara: copper plumbing pipes and abalone shells. “These are not delicate roses on teacups.” Stern said. “She didn’t have access to many materials,” said Stern. “Or roads.” There is a beautiful art deco screen last seen in public when it was displayed new at Bullocks Wilshire and one of the last surviving cigarette urns from the original Beverly Hilton. The blue egg-shaped pottery was designed by Marilyn Kay Austin, who reminisces about the origin of the mid-century piece in an accompanying video. The short films bring to life the legions of lesser-known artists Stern uncovered for the show and some he captured just before their departure. Ceramicist Barbara Willis, who died at age 94 in 2011, told Stern how she made her first kiln in her parents’ backyard during WWII. A little piece of the show continues into the gift shop, where you can purchase the Lucite jewelry created by Judith Hendler and made famous by the dueling dames of Dynasty. The show closes on January 6th.