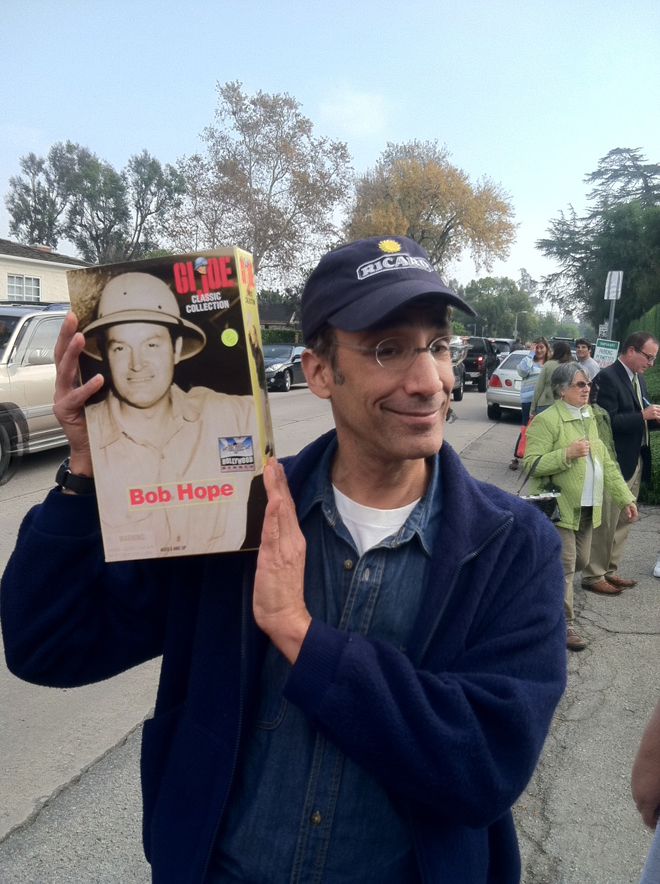 Every local TV station, bargain hunter and Toluca Lake society matron dropped in at Bob Hope’s old compound on Moorpark this weekend hoping to take home a piece from the legendary dead comic’s garage sale. The sale was a rare chance to get behind the hedge of the big movie star estate that’s been in the same hands since 1939 and that got me to drive over. Since the sale was scheduled to last into Sunday afternoon I felt pretty safe getting there 45 minutes after it started Saturday, but less than an hour into it, Bob’s poor daughter Linda, who held the sale in part to raise funds for the Hope Foundation, faced a lunging throng of fans, and the coffee mugs and luggage tags ($1 each) she had been tossing them were running out. A stash of USO action figures ($20 each) was a huge hit with the mob. Every time a new piece appeared the crowd lunged forward hoping for a bit of leftover merchandise plucked from a storeroom. At 10, Hope announced the sale was over and I joined the despondent hordes shuffling past a mountain of half-empty Starbucks cups, past a man peeing in the bushes, past the ancient Nativity scene set atop the wall for the last time. That’s where I met a giddy, but slightly confused woman who didn’t know exactly why she was taking home a small brass headboard ($45) and Dolores Hope’s old hairdryer ($25). Half the crowd seemed to want Hope merch; the other half came looking for more personal items.  Both left disappointed. “There was one little table of memorabilia,” said a shopper who arrived minutes before the opening. “The rest of the stuff you could buy at K Mart.” I didn’t take home a thing, but still had a nice Bob experience, lunch at Bob’s Big Boy down the street.