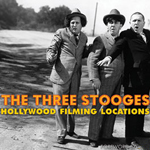 I’ve loved The Three Stooges since I was a kid so I’m totally biased about how great this new book about their filming locations is. This is a big, heavy, handsome coffee table book comparing scenes from the first ten years of Stooge comedies to the same Los Angeles streets as they appear today. In his introduction to The Three Stooges Hollywood Film Locations Leonard Maltin explains how studio ranches would repurpose a house built for a high profile Frank Capra film into one used for B pictures and short subjects. Watch Curly spill a truck full of beer barrels in 1930s-era Echo Park, watch Larry ride a racehorse through the hills that became Forest Lawn. Comparing the rich black and white photographs and the courtroom quality diagrams is a lot of fun and makes you feel like you’re on a treasure hunt.