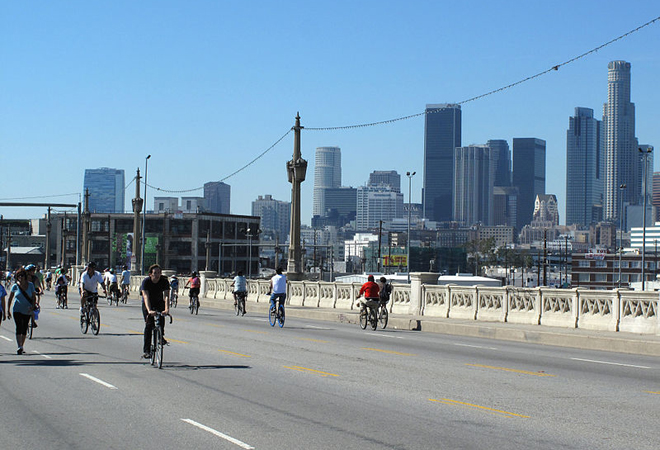 Fifteen miles of L.A. streets will be closed to traffic this Sunday morning for another episode of CicLAvia. The walk and bike event down Venice Boulevard provides a completely different view of the city and allows up close and personal exploration of gigantic swaths of the city that seem invisible to motorists.  Here are 20 excuses to stop and take a look around as you stroll from downtown to the sea this weekend.

The downtown landmark is closed while it undergoes an incredible transformation, but look down at the terrazzo sidewalk as you pass and notice the millions of marble chips shaped into scenes of Southern California. The images of the Hollywood Bowl, Catalina Island, and Griffith Observatory are as colorful and beckoning as they were in 1935. Many of the theaters along Broadway have similar flooring, keep an eye on the sidewalk. The restaurant is scheduled to reopen by the end of the year.

Most of the Wilshire Grand, AKA the 1952 Hotel Statler is gone, but the demolition has a tragic beauty of it’s own. Watching the new shapes the building takes on as it disappears is fascinating, and the temporary open space in a crowded downtown opens up views that haven’t existed since Harry Truman was president.

The slogan of this beloved joint is “Never Closed – Never Without A Customer.” Drop in for a hearty stack of pancakes to carbo load your day and be sure to notice the archeological layers of linoleum at the pay cage.

What do you mean you passed the Pantry and just now realize you’re hungry? OK, you’re going to have to make a slight detour, but the spanakopita at Papa Cristo’s Taverna is worth it. C&K Importing has been selling Greek specialties at this location since 1948.

If you’re on a bike you won’t mind these little side trips, so take a dip two blocks down to Washington Blvd. and marvel at the soaring googie roofline of the nightclub Vintage Hollywood, AKA the Kite Coffee Shop, AKA a newly listed City of Los Angeles Historic Cultural Monument.

Before Jim Jones took his followers to Guyana, he took them to Pico-Union where he purchased a grand 1912 Italian Renaissance church. Since 1977 it has been home to Iglesia Adventista.

Loyola is the oldest High School in Southern California and took in its first students at the end of the Civil War. In 1927 the private Jesuit boy’s school moved to Venice Boulevard . KTLA’s Stan Chambers, Father Gregory Boyle from Homeboy Industries, and billionaire Ed Roski are all graduates.

The first cemetery open to all races and creeds, Angelus-Rosedale has been home to famous Angelenos since 1884. Among the ornate tombstones and crypts are Anna May Wong, Hattie McDaniel, and magician Kellar. The West Adams Heritage Association hosts an annual Living History Tour with costumed actors portraying the dead every October.

The highlight of this neighborhood, dubbed the BLQ, or “Byzantine Latino Quarter,” is without a doubt the multi-domed cathedra. Step inside and your jaw will drop in this golden shrine.

The gated community of Victoria Park has been at the top of the heap since 1908. Outrageous mansions ride high on circular streets, and the Craftsman and Spanish homes with the towering palm trees are the toast of West Adams. Enter on Windsor Boulevard.

You’re almost to the halfway mark, you need a chicken wing. Roscoe’s has been an L.A. institution since 1975 and serves grits, greens, and cornbread until 2 in the morning. Please note: A marathon walk across the city calls for some sweet Netta Ta Ta Pie.

It’s not another food stop, just a tribute to a bygone L.A. brand. Thousands of tiny tile chips were arranged to create the logo of Globe “A1” surrounded by golden wheat affixed to the side of their former spaghetti factory, which now houses a CVS pharmacy, which sells only canned spaghetti.

Museum of Jurassic Technology/Center For Land Use Interpretation

For twenty-five years the quirky MFT has housed exhibits, artifacts, and explorations “dedicated to the advancement of knowledge and the public appreciation of the Lower Jurassic.” Next door is a gallery explaining the far-flung corners of the California landscape. Go see them for yourself, and if you time it right you might gain entrance to the museum’s public tearoom.

This 1956 Ranch-style Starbucks originally housed Ship’s, one of  L.A.’s classic googie coffee shops. The one-time home of the Shipshape burger, delicious potpies, and a rocket-shaped neon sign was designed by Martin Stern, Jr. but reimagined as a coffee house when the coffee shop closed in 1995.

The third installment in 1933 Group’s homage to the Sasquatch, this outlandish bar is inspired by the National Forest aesthetic and offers a flaming marshmallow cocktail sure to relieve your sore arches. Only now do you realize that walking means you could have been drinking all afternoon.

Did someone say drinking all afternoon? OK, you’ll want to pay a visit to 1933 Group’s other theme bar in Culver City, this one honoring jazz-age Culver City racecar driver Barney Oldfield – and lookie here! A one buck tacos from 12-4!

More than ninety years ago, Venice High School student Myrna Loy posed for artist Harry Weinbrenner’s statue outside the school, called “Inspiration.” The original was vandalized and deteriorated so severely over the years that it ended up in parts inside a metal cage. In 2010 the artist Ernest Shelton replaced it with a recreation.

Beatniks, punkers, and Dennis Hopper have all enjoyed the poetry and more than 40,000 volumes flowing from Beyond Baroque. The “independent Literary | Arts Centers” took over the historic 1907 City Hall building in 1968.