Why did they tear down the original Hot Dog on a Stick in Santa Monica?

The beloved but bedraggled 76-year-old stand was demolished and will be replaced by a similar-looking, but 30 percent larger, the restaurant still filled with “hotdoggers” frying up corn dogs and churning out lemonade. “We tried to save as many original items as possible,” said Jenn Johnston, president of FAT Brands, which also owns Fatburger and Johnny Rockets. “But a lot of the items had significant wear and tear, which is what ultimately led to the remodel.” The city landmarks commission reviewed demolition plans and came to the conclusion that the business was more significant than the building. Auf wienersehen.

Q: What happened to the cool Plaza of Mesoamerican Heritage sculpture garden at Forest Lawn Hollywood Hills? It’s like a lost Disney ride.

A: Like everything at Forest Lawn, unto dust shalt thou return. Well, at least that pertains to the giant plaster replica of the Aztec sunstone, which succumbed to the elements after three decades outdoors. James Llewellyn, the nephew of Forest Lawn’s theatrical founder, Hubert Eaton, created the park in 1987, recalling his vacations south of the border. Management hoped to attract Latino visitors and future customers with copies of 17 monumental relics set in a cactus garden. The surviving statues are in storage, and the ground below is being prepared for new residents.

Q: What are those three  buildings with domes at National and Barrington boulevards?

A: Starting in 1940, Paul J. Howard ran a sprawling plant nursery and extravagant gift shop called California Flowerland on that corner. In his twilight years, the super patriot added shops and restaurants built in Early American style along his property. “Colonial Corners” had giant flagpoles, monuments to the presidents, and an old-fashioned ice cream parlor with 66 flavors. Howard railed against taxes and talked of preserving Americana, but weeks after his death in 1966, his heirs sold it all to real estate developers. If you squint hard enough at the roaring hearth inside the Starbucks, you can imagine you’re in Colonial Williamsburg. 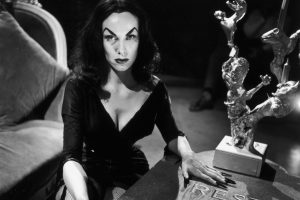 Before sexy vampires were a thing, Vampira was rocking her glamour-ghoul image in movies and TV. The actress—née Maila Nurmi—was born 100 years ago this month, and fans will gather on December 11 to remember her with a screening and a visit to her tomb at Hollywood Forever cemetery. “We’ve got Oscar winners and rock stars,” says cemetery tour guide Karie Bible, “but more people come to see the horror hostess.” That evening, the American Cinematheque is presenting footage of the starlet, along with a double feature of Ed Wood (in which Lisa Marie plays Vampira) and Wood’s 1959 epic Plan 9 From Outer Space (starring Vampira, of course). “She’s a feminist, a goth icon, a beatnik,” Bible says.