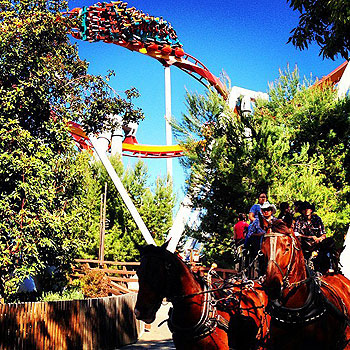 Q: The Mrs. Knott’s Chicken Dinner Restaurant at Knott’s Berry Farm recently switched to serving Smucker’s jam. But isn’t it their boysenberry preserves that made Knott’s a household name?

A: Those berries were a big deal for Walter Knott, who popularized Rudolph Boysen’s fruity crossbreed at his Buena Park roadside stand in the 1920s. In 2008, the Knott’s food brand was acquired by Smucker’s. The Ohio-based company is still mass-producing Mrs. Knott’s specialties, but it decided to stop manufacturing the single-serving packets this year because they were being made only for the Orange County restaurant. Which explains the sacrilegious spreading of out-of-state jam on those California biscuits.