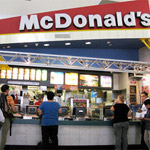 Q: Not to sound like a fast-food junkie, but is the McDonald’s inside the United terminal at LAX permanently closed?

A: That Mickey D’s has disappeared, along with the Burger King and several other franchise eateries, to make way for some hometown favorites. The airport version of the Lemonade chain recently opened in the Delta terminal; a Cole’s, a Campanile, and a Seven Grand (as well as a scaled-down Original Farmers Market) are slated to follow. If you’re craving a Big Mac, drive to the world’s oldest golden arches in Downey.