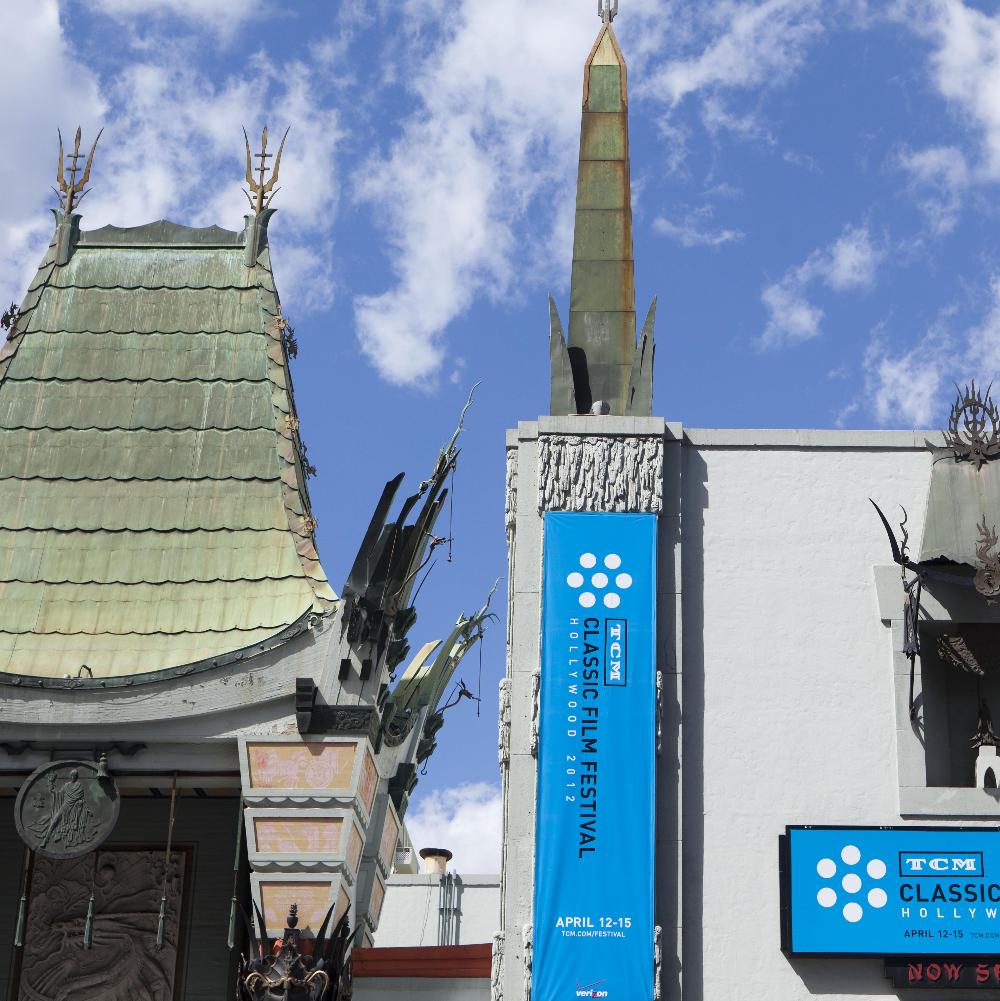 What a thrill to stroll down Hollywood Boulevard this weekend as it was lined with die-hard movie fanatics soaking in the glamour of the third annual TCM Classic Film Festival. More than one hundred screenings, signings, lectures and even a hand and footprint ceremony were spread between the Chinese, Egyptian, the Roosevelt Hotel and other neighborhood venues and the revelers stood out from the tourists with giant badges on lanyards that built a real sense of community. It was so perfect when I sat down next to a wide-eyed couple, literally from Peoria, gaping at their old-time movie idols perched closer than a television set. These days you can catch revival screenings at the Cinematheque and Cinefamily, the Billy Wilder and the Bing, but the personal appearances TCM arranged really brought the festival to life.

The first program I attended was a new documentary called The Elephant In The Room about silent star Baby Peggy. The bob-haired moppet starred in dozens of short films starting in 1921 and is still answering fan mail more than nine decades later. Her image was plastered on toys and clothing and she was held up alongside Chaplin and Shirley Temple (who the star met later in life but was “not allowed to ask about her childhood.”) before her career and personal life imploded in the 1930s. After the show, the sparkling nonagenarian bounded to the stage with critic Leonard Maltin. The actress was wiped out by her father who cleaned out the family bank accounts when she was still a teenager. The actress moved to Mexico and later worked in a California mission, taking the name of the padre who created them.  The renamed Diana Serra Cary remarked that “If you lose everything, you can’t be hurt in life. You go back and pick yourself up again and if you’ve got the talent it will pay off.”  Then she said “To grow old gracefully is the greatest triumph of life.”

As I was leaving the auditorium I overheard my first reference to the epic crowds that characterized this years fest. “The line for Vertigo is around the block.” One of them said before revealing “I saw them filming Kim Novak this afternoon and she said she was bi-polar. I wonder if they’re gonna cut that out on television.”

Director Stanley Donen appeared at the first TCM Fest in 2010 at a screening of Singin’ In The Rain and was back this year to introduce a film I had never even heard of called Two For The Road. “They didn’t like musicals any more” Remembered the filmmaker “So in order to survive I had to do something new.” The skewered romance follows Audrey Hepburn and Albert Finney as a young couple on the road to middle-age and features music by Henry Mancini and mod costumes by Mary Quant. Donen said the non-linear storytelling was influenced by Fellini and John Huston and told of how difficult it was to get made. “What do you say when some moderately young jackass asks you to look back on your career?” said host Ben Mankiewicz. The director shot back “I prefer to look forward.”  After the film I spotted some friends in the lobby of the Chinese Multiplex, which became a way station for weary moviegoers. One friend admitted to taking catnaps between the screenings, which began before 9 a.m. and concluded some evenings at 2 a.m.  That afternoon I overheard another tired festivalgoer say “You start losing track of time when you’re in a dark room all day.”

The Egyptian was packed on Friday night for a screening of Young Frankenstein introduced by Mel Brooks who opened the night with “Thanks for coming and for being the foolish people that you are.”  Brooks explained that the origin of the film came from something Gene Wilder was working on during Blazing Saddles. Brooks proposed a collaboration and Wilder was up for it as long as Wilder didn’t appear in the film. “He thought I’d be in a suit of armor and say ‘Hello, folks!’” Brooks had been a fan of the Karloff Frankenstein since he saw it in a Brooklyn theater at age five and was afraid the monster would follow him home and “Come up the fire escape and bite me and kill me!” Brooks’s mother explained what an improbable schlep it would be to “Take a train from Transylvania to the port and then he has to take a boat across the ocean and then a train and find Brooklyn and climb up five stories… and he’s not gonna bother with that.”

My Saturday began with a collection of 3D rarities including Soviet travelogues and Motor Rhythym, a claymation created for the 1939 New York World’s Fair hosted by French cinéaste Serge Bromberg whose playful reminder that “Cinema was invented in France” drew snickers from an audience outfitted with polarized lenses. The films ranged from 19th century paper-based stereo to a cartoon released earlier this year and featured the work of Auguste and Louis Lumière, Looney Tunes from Chuck Jones and Knick Knack, John Lassseter’s film about an amorous snow globe that launched Pixar.  Bromberg dispelled some myths about the work of Lumière, which he has been restoring for years, but remarked that “sometimes the legend is better than the reality.”

Maud Adams and Eunice Gayson opened the screening of the very first installment of the James Bond series, Dr. No from 1962. Mike Myers has kind of ruined this one for me, aping all the gags and gimmicks for Austin Powers. Modernist evil lair? Check. Identically dressed minions? Check. The still-vivacious Adams, who appeared in Octopussy and The Man With The Golden Gun opened the discussion saying “It’s wonderful for young men to still think of you the way you were.” And Gayson explained how the cast and crew plied a nervous Sean Connery with booze to help him get into character. “He was terrified that first day in the studio.” She remembered. “We had all sort of subterfuges to get him to relax. That’s a highfalutin’ word, but we had to do it.” Host Mankiewicz discussed how the character changed between Grayson and Adams’s stint, asking them to name their favorite Bond (Adams is in Roger Moore’s camp) when Gayson explained how modesty watchers kept her in check. “You had to wear a rose down your bosie.” Explaining that it was the first time “The world woke up to see British women weren’t half bad.” Adams shot back “I never wore a rose down my bosie! And “I have to speak up for the Swedish Bond girls.” Mankiewicz chimed in “I don’t think we ever said Swedish women weren’t sexy.”

Watching a 1950s movie about the 1920s is one level of retro and watching it sixty years later in the same room much of it takes place is simply recursive. The Chinese theater was packed to the gilded rafters on Saturday night for Singin’ In The Rain’ with Miss Debbie Reynolds in attendance. TCM host Robert Osborne began by bringing her out but by the time they got to the stage, she had broken free and was beaming in the affection of nearly 2000 fans standing and cheering. “They took this little girl from Burbank” said the star of the epic musical “and molded me into a good dancer.” Reynolds was 17 when the film started production and star Gene Kelly was 39. The gum smacking teenager was asked to stop chewing and disposed of the gum on the rung of a ladder Kelly was about to dance with when he got stuck. “He moved away and his hair didn’t.”

Many of the folks turned away from the sold-out screening headed for “Club TCM” a sort of hospitality suite in the Blossom Room of the Roosevelt Hotel. On Saturday night, Osborne shuttled across the street to host an 18th birthday party for the network complete with giant cake. Robert Wagner, Kim Novak, Ben Mankiewicz and Turner executives joined him onstage and sang happy birthday to the channel before a champagne toast. Osborne said Turner chose the date because the first cinema in New York opened exactly a century before. He also added that he was a little intimidated by the media mogul and had prepared a list of discussion topics. “I was scared to meet Turner and he came up to me and said “At last! I’ve got someone to talk movies about!’ and I threw my list away.” Osborne is as much of a draw for the TCM fans as the actors they’re watching in the films. He talked about being thanked by the ill and homebound and out of work. “I had no idea the channel would be a nurse to so many people.” A guest next to me said the network “Is soothing… Like going to grandma’s house.”

The last day of the festival I caught a program on the history of the Brown Derby restaurants by Mark Willems who said that the wife of Cobb Salad creator (and Derby owner) Bob Cobb often dined in other restaurants and ordered their signature dish “just so she could tell them they were doing it wrong.” I also saw Call Her Savage, a Clara Bow film restored by the Museum of Modern Art. Curator Anne Morra promised “I’m not going to give you a boring museum lecture. I’m going to give you dish and gossip!” which was sort of the running theme of the whole four days. The pre-code film was one of Bow’s last and one of a handful of talkies made by the silent star that returned to movies after a hiatus. She told her husband she was “Going to Hollywood to make enough money to stay away.” The film was totally poignant, funny, sexy and moving and I had never heard of it. I was reminded of what the Frenchman hosting those 3D movies said earlier in the festival. “ There is no old and new, just good and bad.” He was right. See you on Hollywood Boulevard.