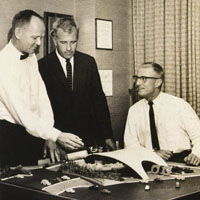 Architect Eldon Davis, whose googie style buildings would come to define a movement in mid-century California architecture, died yesterday after a brief illness at the age of 94. Davis and his partner Louis Armet gained fame for their eye catching and exuberant restaurants of the 1950s and ‘60s including Norms, Pann’s, Ships and the Wich Stand. Their style was spread nationwide with prototype designs for Bob’s Big Boy and Denny’s. In 1963 Victor Newlove joined the firm that is now known as Armet Davis Newlove and heads the company that is still creating restaurants, churches and civic buildings. I was a teenager when Alan Hess wrote Googie Fifties Coffee Shop Architecture. His groundbreaking exploration of the style had a profound impact on me. I begged my parents to take me on expeditions in search of the survivors and it led to my great love of architecture and my great love of Los Angeles. I came to become friends and collaborate on projects with Eldon’s colleagues like designer Helen Fong, photographer Jack Laxer and partner Victor Newlove. In 1993 the Los Angeles Conservancy Modern Committee honored the firm with an exhibition and lecture series. Last year the ModCom presented Davis and Newlove with the Modern Master award for architecture. Just a month ago Eldon, his wife Luana and I walked around Hollywood looking at buildings and eating pie. Eldon was my architectural hero. He even inspired my love of bow ties. He created all my favorite places and led a remarkable life.  I will miss him greatly. Eldon is survived by his sons, daughter and wife Luana.

Please visit our slideshow tribute to the architecture of Armet & Davis here.