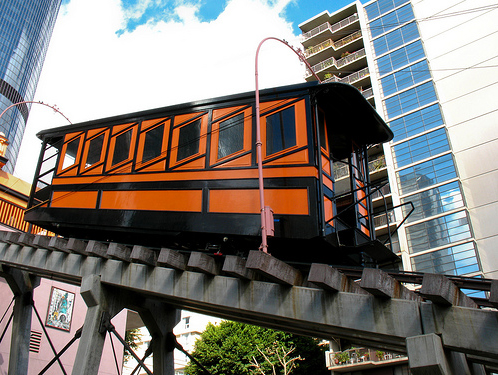 The historic Angels Flight Railway connecting Bunker Hill to the rest of Downtown Los Angeles has been closed for just over two years. Despite naysayers, fans of the funicular are rallying to raise funds for the tiny train with a November 5 fund-raiser at the Million Dollar theater on Broadway.

The family of producer Seymour Nebenzal will be on hand for a screening of the 1951 classic M starring Raymond Burr and filmed on location at the top and bottom of the tracks. Bunker Hill historian Nathan Marsak will present rare images of the lost neighborhood and a series of film clips featuring Angels Flight through the decades.

The train was shut down in September 2013 following a derailment caused by a malfunction of the braking system. If it feels like Angels Flight has been closed forever, it’s because it was shut down for nine years after an accident killed a passenger in 2001. Here’s hoping funds from this event can help the little engine.