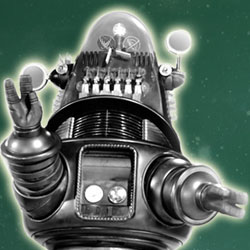 Forbidden Planet is one of my all-time favorite movies. The retelling of Shakespeare’s The Tempest set in the 23rd century is the pinnacle of 1950s sci-fi and still looks amazing today in Metrocolor and Cinemascope. The Academy of Motion Picture Arts and Sciences explores the technology behind the film at a screening at their Linwood Dunn Theater in Hollywood this Saturday. The space opera has spawned a musical on London’s West End, an experimental music concert, a proposed James Cameron re-make and a 2013 project from producer Joel Silver that is “not a remake”, “not a reimagining”, and “not exactly a prequel.” Come learn how pre-Star Wars (Heck, this was before Attack of the Crab Monsters!) effects were made with paint, clay and magnetic tape. Advance tickets are sold out, but line up early or come back for the free talk in the lobby on Sunday. Robot costumes are optional.