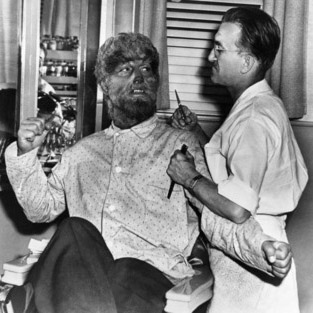 The Academy of Motion Picture Arts and Sciences just announced their acquisition of Marc Wanamaker’s Bison Archives. Wanamaker spent more than forty years collecting photographs of movie studios, stars behind the scenes (check out Lon Chaney getting a trim from makeup man Jack Pierce while filming the 1941 version of The Wolfman) and a ridiculously comprehensive record of long gone places on the streets of old Los Angeles. Wanamaker has long been the secret weapon behind countless books, magazine articles (His photos have appeared in Los Angeles magazine for decades) exhibitions and TV programs about old L.A. and 70,000 of his images will join the more than ten million already in their collection. After a stint as a rock drummer in the late ’60s, the long-haired rocker started the collection to document the studios, soundstages and backlots he’s long been fascinated by and was around at the end of so many of the original collections. He was the guy the studios called when they started tossing stuff in the 1970s and dutifully stashed it in his basement – until today. Cecilia DeMille Presley, daughter of legendary director Cecil B. Demille helped fund the purchase.