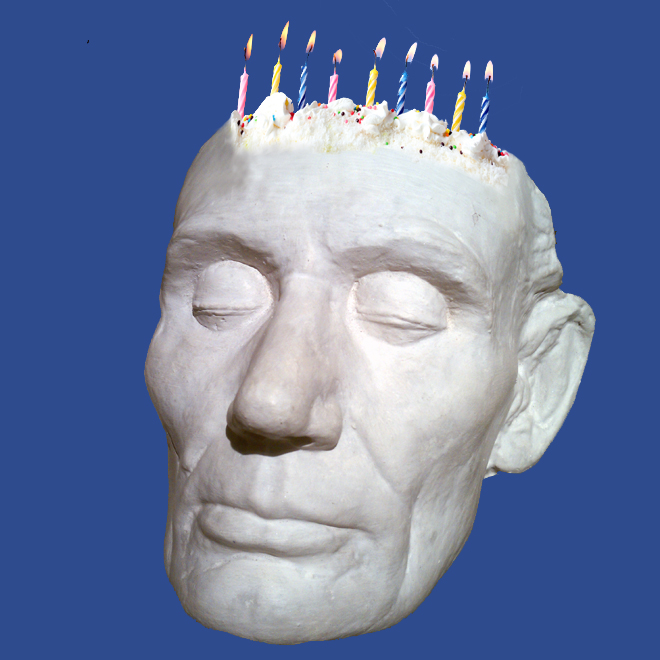 Today we mark the 203rd birthday of Abraham Lincoln and celebrate the 16th president with outlet mall super sales, dinner and a show at the Lincoln Shrine, a free copy of Spielberg’s biopic at every High School and Junior High in America, and this awe-inspiring rant from benevolent misanthropist Nathan Marsak.  The renowned historian from Highland Park is currently working on a history of downtown’s Bunker Hill.

Hollywood is famously derided and beloved for her (mis)representation of history; period pictures are often laughable, either for their visuals (God bless Robert Redford’s hair in The Sting) or the history itself (cf. generalized silliness in Braveheart or Restoration et al)…such is even the topic of coffee table books. I don’t envy Hollywood the job of condensing a war into ninety minutes of celluloid while producers yell they want it sweepier and weepier, though the results are the stuff everyone loves.

To wit, Lincoln swept the Oscar nominations, and should certainly win for Costume, Cinematography, Production Design—though how was it not nominated for Makeup & Hairstyling?  By virtue of the men’s facial hair alone?  That Lincoln is being touted for its historical accuracy (leaving aside its dubious role as “civics lesson,” well, therein lie issues for the nitpicking class.

In an alternate universe Los Angeles never had the Yankee-supplying railroad boom of the 1880s and our still-staunchly Confederate little town makes a very different Lincoln in 2012.  Instead of a veiled passing reference to “Lincoln the tyrant,” we might have really examined Lincoln, puppet of the industrial North, foe of free trade, jailer of newspapermen, etc. (screenwriter Tony Kushner called Lincoln “the greatest democratic leader in the world”). How is it everywhere else in the world got rid of slavery without a war? Because Lincoln fought a war about taxation and the focus solely on slavery is revisionist history, which might make an interesting picture?

Lincoln plays like a police procedural, with elements of the thriller—we have to pass the amendment before the bomb goes off! (or, as is the case here, we have to keep the bombs going off to pass the amendment!)—and as such the movie is cartoonish, and thus the bad guys cartoonishly bad. Southerners are basically the moustache-twirling Rabbis from Gibson’s Passion.  Even the most ardent historian expects poetic license—Mary Todd Lincoln did not attend the debates at the House of Representatives, but it was filmically strong, so…ok; there’s some invention about assorted Republicans against the 13th Amendment, a harmless enough fabrication, but why add “nuance” (a dig against Republicans, adorable, and more topical than just throwing in flying robots) when so much other nuance is left out? Black soldiers greet Confederate VP Stephens at Fort Monroe; this did not in fact occur, but everyone in the audience went Oooooo! It is never mentioned that there were black Confederatesoldiers, why didn’t they then accompany Stephens?  Oh.  Too much nuance.

Here is but one example where Kushner’s screenplay gets wonky. Lincoln’s in the White House kitchen with abolitionist Thaddeus Stevens; Stevens is distressed Lincoln didn’t enact emancipation at the outset of war.  Lincoln asserts that had he done so “instead of abolishing slavery, as we hope to do, in two weeks, we’d be watching helpless as infants, as it spread from the American South into South America.”  Um, what?  The slave trade to South America predated ours by 125 years, and while slavery died out in the Spanish territories in the 1820s—where it was not going to reestablish itself on command of the Confederacy—the greatest percentage of slaves were taken to Brazil, where it remained until1888, a full twenty-three years after passage of the 13th.  Shouldn’t we rather have been worried about slavery spreading from South America to the American South?

To all of which you say, so what?  Lincoln aka our Greatest President did what he had to do for the Greatest Good. Lincoln is the latest addition to America’s Pantheon, though the rest of the world may not see this picture through the same rose-colored glasses.

Soldiers saunter up to Lincoln early in the movie and recite his Gettysburg Address back at him; their knowledge of it (it was not well-known until years later) is very strange.  Spielberg, himself speaking at Gettysburg last November, said how glad he was to bring back Lincoln, “even if only in a cinematic dream.”