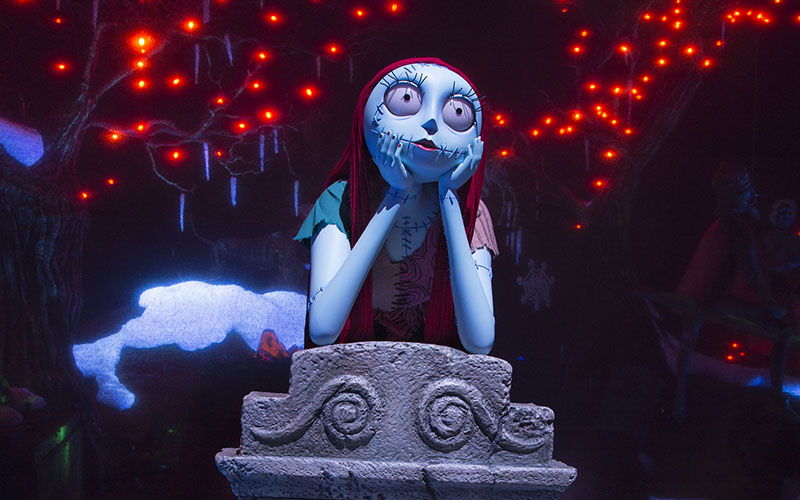 Sally, the rag doll from The Nightmare Before Christmas, has joined the vast menagerie of audio-animatronic characters at Disneyland. The new blue girl appears behind a graveyard tombstone in the Haunted Mansion Holiday makeover of the famed ride.

Every fall, more than two dozen figures from the Tim Burton classic are added to the attraction, which has spent the last 15 Christmases under tinsel and snow for the season when “two holidays collide.” Sally joins another recent addition to the mansion—the Hatbox Ghost, an animatronic that was present at the ride’s opening in 1969 and was evicted shortly thereafter. It was reinstalled last year.

Walt Disney started tinkering with robotic figures before Disneyland was opened. The animals in the Jungle Cruise were early attempts at moving figures before the Enchanted Tiki Room became the first show devoted to the high-tech creations that were controlled by room-sized computers.

Garner Holt Productions in San Bernardino created the new Sally. The special effects company, which also makes training figures for the U.S. military, created the majority of the props and scenery that transform the mansion into a frightful winter wonderland.

“We also created the animatronic Oogie Boogie,” says Bill Butler, Holt’s creative director. “And a second version of the show at Tokyo Disneyland.” The animatronic version of Tim Burton’s Sally seems a little cleaner and simpler than the one in the movie—she doesn’t quite have the clay skin and baggy eyes of a girl held prisoner by an evil duck doctor.

The Haunted Mansion had a huge influence on a young Garner Holt, who first heard about the ride in the fourth grade when his mom bought the soundtrack album at K-Mart. “I fell in love with it before I had even seen it,” he says. “Then I saw the Osmonds touring it. That really inspired me.”

As soon as he exited his first doom buggy, Holt had decided robots would be his life’s work. Back home in the Inland Empire, he began to create a (super dangerous looking) backyard amusement park that evolved into a haunted house company, and eventually the world’s largest producer of animatronic figures. Holt explains his origins in a TED talk.

So where are the Nightmare Before Christmas ghosts stored the rest of the year? “Guests don’t realize that 90 percent of what you see is stored inside the ride,” says Butler. “If the lights were on and you could see around corners… It’s a huge space with lots of places to hide.”