Home Uncategorized A Look Back at Robinson’s as the Glamorous Beverly Hills Store is... 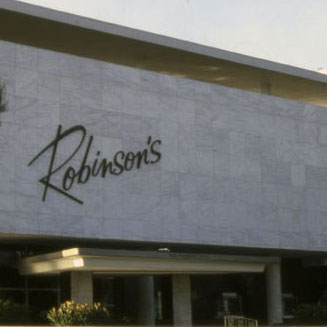 The calls and emails and gory cell phone videos have been coming in all week as the former Robinson’s department store in Beverly Hills is being demolished. The ultra-glamorous shopping palace opened in 1952 and was designed by William Pereira and Charles Luckman, the iconic architects behind CBS Television City, LACMA, and the Forum.

The store, which period reports describe as being covered in “Travertine marble from Peru, St. Victor’s rose marble from Portugal, black Andes granite from Brazil, and Rosewood from Madagascar” is currently being ground into a fine powder as plans for a high-rise condo building continue to marinate.

Robinson’s began in Wild West-era L.A. with a store at Spring and Temple, which relocated to 7th and Grand in 1914. That building is now a data center with Coco Laurent and Sugarfish restaurants on the ground floor. The chain merged with May Company in 1992 to become the short-lived Robinson’s-May and closed their last store in 2006.

To celebrate this grand old Los Angeles nameplate, let’s take a look back at Robinson’s through the years, with images from the Los Angeles Public Library.