Home L.A. History A Feast of Vintage Menus on Display at Downtown Library 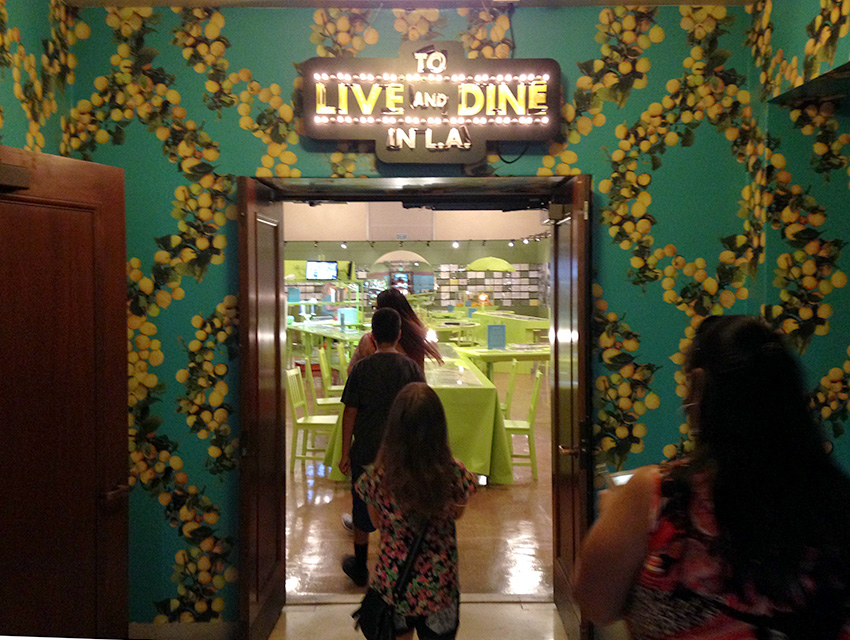 Old restaurant menus are hard to find. The condiment-drenched few that collectors (like myself) covet were most often stolen, then folded spindled and mutilated before being glued in a scrapbook, hidden for decades, and eventually sold at a flea market. There are tales of those who obtained them legitimately, but those are rare. It’s a wonder that the Los Angeles Public Library has a vast collection of more than 9,000 beautiful and colorful bills of fare spanning the entire 20th century. The exhibition To Live and Dine in L.A. opened last month and the Getty Gallery inside the downtown library and it is magnificent.

An enormous communal table snakes through the gallery and artifacts from the library’s vast collection are served under glass. The history of dining out in Southern California is explored through essays, photos, and video interviews. I grew nervous watching the delicate paper artifacts handled by chefs so close to open flames.

Old menus obviously explain what Angelenos ate in decades past, but also offer a look at the way cuisines and cultures were portrayed, they sometimes feature maps, poetry, and even architectural renderings of lost landmarks. Curator Josh Kun explores the collection through many lenses, as he did so well with his last project for the library Songs in the Key of L.A., including contemporary cooking and even access to food. I spent quite a bit of time in a section of the exhibit called The Prison Gourmet and met the family of one of the contributors who explained how Chicharrones, Cheetos, water, and pickles (“they put chicharrones in everything” one of the ladies told me) are turned into jailhouse tamales.

The exhibit is beautifully designed around dining icons like a pie case, vinyl booth, and cafeteria line, and all showcase objects from the collection to further Kun’s conversation about cuisine. The accompanying book (with a foreword by Kogi’s Roy Choi) explores historical and social meaning around California eating, and features remixes of historic recipes by contemporary chefs. Patina’s Joachim Splichal suggests replacing Robaire’s Bouillabaisse with Cioppino, and Lobster Thermidor with Lobster Risotto with Pink Peppercorn Sauce. The slick pages are filled with about 275 images from the LAPL collection and let you revisit old favorites like Lawry’s, Bob’s Big Boy, and Clifton’s Cafeteria.

The book and exhibit were created to draw attention to the special collections owned by the library, so the selection of menus is limited to those in the archive. A terrific companion piece is Menu Design in America 1850-1985  edited by Jim Heimann. This massive Taschen tome features more than 800 big, delicious photos in rich glorious color and is guaranteed to make you want to pay a visit to one of L.A.’s classic restaurants.