Home Uncategorized Yes She Can 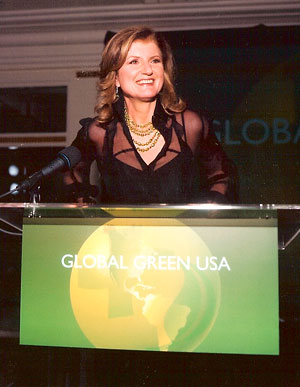 Back in 1996, Al Franken and Arianna Huffington shared a bed. They did it on Comedy Central, in a recurring skit commenting on the presidential campaign. At the time this was ka-ra-zee late-night humor, proffered by a pair of fringe dwellers representing the Left (comic Franken) and the Right (author Huffington). The fledgling cable channel was a good fit for their shtick. But 12 years on, both are a lot closer to the center of the action—if not the mattress.

Franken, of course, is running for a U.S. Senate seat, with a shot at defeating Republican incumbent Norm Coleman. Huffington is everywhere, showing up for book parties, fund-raisers, film openings, conferences—and hosting salons at her Brentwood home when not enough is on her schedule. Over the last two decades her politics also have been all over the map. She has transitioned from a Friend of Newt and a champion of the Contract with America to a hybrid-touting gubernatorial candidate and antiwar talking head. But it’s in going from a networker to a Net worker that she has found her most convincing iteration yet. As editor-in-chief of the Web site the Huffington Post, she has achieved something more than celebrity—she’s become an Influence. She doesn’t need comedy writers to get people interested in what she has to say. They already are.

This election season the three-and-a-half-year-old Huffington Post has attained a new level of prominence and a new group of readers. The attention is rooted in the news stories the site’s been breaking. One correspondent alone, Mayhill Fowler, reported on Barack Obama’s comment at a San Francisco fund-raiser that working-class voters were “bitter” and clung to guns and religion; her report continues to haunt Obama. Fowler followed up by recording Bill Clinton tearing writer Todd Purdum a new one after his critical Vanity Fair profile appeared. That’s more news than Time’s Joe Klein broke this season, and Fowler is compensated far less than your average print eminence.

Huffington has a richly deserved reputation for fluffing and folding celebrity friends into her universe; on a recent day the Post had commentaries from Norman Lear, Russell Simmons, and Bernard-Henri Lévy. In its infancy the HuffPo revolved around dispatches by her pals. But while Huffington was colonizing the Internet, the Internet was colonizing her. Today it’s the who-dats—folks who probably couldn’t get an invitation to a Brentwood dinner party, folks who found their voice on their own blogs—who have given the site much of its life. The HuffPo has made phenoms out of heretofore unknowns like Bob Cesca, a Philadelphia animation producer and video maker for Iron Maiden and Meat Loaf who has cultivated a disarmingly conversational mode of attack. Sam Stein, a former intern at Newsweek, reported early on John McCain’s ties to far right pastor John (God sent Hitler) Hagee and was the first journalist to scrutinize the relationship between John Edwards and staffer Rielle Hunter.

In a year when the Webbiest major candidate ever is campaigning against a guy who doesn’t text message, the Internet and Huffington keep colonizing each other. Obama’s Web base and hers comfortably overlap, a connectivity that has not escaped either side. After comments by Jeremiah Wright almost derailed Obama’s campaign, the candidate gave his first statement on the Rev to the Post. It was a savvy thing to do: a direct appeal to his constituents.

The HuffPo is also aggressively expanding. While newspapers continue trimming staff and pages, it recently created a Chicago version to assemble a regularly updated page of local news and commentary—and it plans to establish more regional sites.

Look for Huffington to open a Los Angeles edition. Chicago, L.A.—could this be a side-door assault on the Tribune Company and its owner, Sam Zell? Connect these dots: Huffington has been longtime friends with David Geffen, and Geffen reportedly has lost interest in acquiring the Los Angeles Times. “He is so over it,” a friend said of Geffen’s onetime bid. Is Huffington helping him get over it by creating a media platform with a future?

There are bigger Internet-bred threats to newspapers than the HuffPo (Craigslist, say, or niche advertising), but its ambitions seem to have some of the folks around Zell worrying. In a recent memo, Zell’s, um, visionary consultant Lee Abrams raved about Huffington’s latest site. “There’s new competition in Chicago,” he wrote. “I think this is significant, because: It’s the new generation of competition that we need to be aware of…and COMPETE with…. I think they do a great job for day one. Personally, the story selection, the categories, the scannability are all great. Check their Crime page….”

On the day she launched the Chicago site, Huffington was getting ready for a vacation in Greece before the political conventions began. She was juggling phones and administrative duties as she described the Post’s growth. “We now have over 10 million visits a month,” she said, “and a very vibrant community—we had over 600,000 comments posted last month. We want to be a national Internet newspaper that covers everything. Politics will always be paramount, but we now have a lot of people coming for entertainment, media. You can measure our growth by all the new sections we are launching.”

HuffPo now has a Green page, a Style page, and a Living section. As is true with most Web sites, these departments are built around reports cobbled from other sources. One freestanding department that thrives on new material is the campaign journal OffTheBus. Through the use of countless “citizen journalists”—bloggers, writers, bystanders holding a microphone—it has been covering the election the opposite way a newspaper would. Instead of deputizing staffers to a beat, OffTheBus throws whoever has something to say at a candidate or an event, further blurring the unclear line between professional journalists and wanna-bes—heck, between writers and readers. It provides immediate frontline coverage, rendering a race from an infinite number of perspectives and angles. Although she didn’t invent the notion of the citizen journalist, Huffington has capitalized on it. Ten years ago a dispatch by an outsider like Mayhill Fowler standing in the right place at the right time would have never seen the light of day; there was no chance a “nonreporter” would penetrate the mainstream firewall. Four years ago the item might have received a few lines within a mainstream media account; it would have been swallowed and digested whole by the whale. This year Fowler’s scoop has its own forum, where it dominated the news for weeks.

In other ways the Post resembles an old-fashioned tabloid. By blending buzzy political coverage with hourly doses of cheese (the latest news on the new Treo phone, raunchy shots from Olympic beach volleyball), the Post embraces a Hearstian mix of smart and stupid that mainstream print journalism rarely gets right, because they look at it as a guilty necessity. All-accepting, even frighteningly inclusive in public, Huffington embraces a lot of disparate threads online. She’s been a New Age seeker since her twenties, and there’s a scented candle burning deep within the Post, leading to headlines like “5 Religions You Might Not Know,” tips on “green dating,” and an astrology feature.

This blend may be the ultimate expression of Huffington the polymorphous pilgrim some find easy to write off (while they hope to get invited to her next party). Her woo-woo factor provides an otherworldly context to the Post, which promises you can support your candidate and track Olsen twins gossip and find a fluorescent lightbulb that doesn’t suck. She comes from “somewhere beyond the political spectrum,” as they used to say on KCRW. There are more astute political sites like Politico or the Washington Note, and there are better aggregators (Andrew Breitbart is some kind of genius), but “somewhere beyond” has proved a protean address from which to re-create the newspaper experience on the Internet. Oprah generated millions with a magazine that effortlessly built itself around herself. Now Huffington seems poised for a similar media branding.

It was clear from early in the primary season that Huffington was pulling for Obama. When the HuffPo publicized that Hillary Clinton had been bashing the Web minions of MoveOn, the site was laying down a marker. The report couldn’t help but drive more of a wedge between Clinton and the Web activists who have flocked to Obama’s side. It’s those Netizens who gave Obama his commanding lead in fund-raising, and many are the same folks who account for millions of clicks at Huffington’s site. Obama and Huffington are both social movers who discovered almost accidentally that having friends in high places was dandy but marshaling the online millions could be dandier still.

Huffington has a long history of not being friendly with the Clintons. In her recent book, On Becoming Fearless…In Love, Work, and Life, she mixes the can-do cheeriness of the self-help guru with the chattiness of the political columnist. Somehow it works—she alludes to Nietzsche and Naomi Wolf, then riffs on the benefits of green tea and menopause. She wants to draw the toxins out of your body and the body politic, and to her, Hillary Clinton is the biggest poison around. Even in a feel-good pep talk of a book, Huffington finds the time to characterize Clinton as “too afraid she’s going to offend some group of likely voters if she stops playing the ‘all things to all people’ card and starts really leading.”

Indeed, Huffington was attacking the Clintons when she was a Reagan Republican, so her ongoing criticism may be one of her few through lines. In a February 2008 column, “Clinton, Obama and the Belief in the Magic Power of Words,” she writes, “Obama uses words to persuade, to mobilize and to get people to imagine that reality can be changed. And based on how his campaign has been run, on the ground, in state after state, it’s clear that he knows changing reality is not done through magic—it’s done through hard work…. It is Clinton who uses words to deny reality, and expects them to magically change it. Haven’t we had enough of that over the last seven years?”

This is not the first time that Huffington has fallen for a mysterious man who speaks of abstractions like “change” and “hope.” She wrote a book about Pablo Picasso; she’s been a follower of John-Roger’s Church of the Movement of Spiritual Inner Awareness; she’s a graduate of Tony Robbins’s coal-walking workshop. Obama is—among many other things—America’s top inspirational speaker, just the kind of guy Huffington responds to.

A lot is hanging on the November election. For all her recent success, could Huffington’s status as an Internet mogul be hanging in the balance, too? Because while the HuffPo is attracting thousands of new readers brought in by its political coverage, what comes after the votes are counted? National Review was much better off with Reagan knocking on the door than knocking it down; The Nation thrives whenever a Bush is in the White House. Huffington has elevated a site and a persona on the platform of a titanic political struggle. The Internet, though, is full of Web sites wounded and departed, bloggers who became stars in the aftermath of September 11, then became white dwarfs when the public’s attention wandered. Bashing Republicans and championing a crusading outsider have been gold for Huffington, but her site could be headed for the journalistic equivalent of the oft-quoted line from the 1972 film The Candidate: “What do we do now?”

“I don’t think they have a clue what to do if he wins,” says one staffer. There are bigger problems to have, and better ones, too.